A mammoth crowd of loyalist and party supporters besieged the Umugaa country home of Sen. Nkechi Nwaogu in Osisioma Ngwa Ward 2 as the former Member National Assembly Member and Pro – Chancellor, University of Calabar, Distinguished Sen. Nkechi Nwaogu revalidated her membership of the largest party in Africa, the All Progressives Congress ( APC).

Speaking to newsmen after the excercise witnessed by the leaders of the party at both the Ward, LGA, State abd the National, Sen. Nwaogu said, the time is ripe for the entrenchment of people – oriented government in Abia state and urged
all lovers of good democracy and governance to come out in their numbers to participate in the ongoing APC membership registration and revalidation excercise . 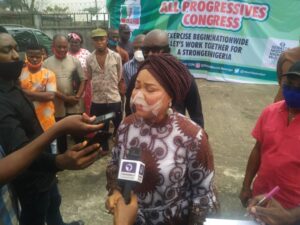 Sen. Nwaogu added that; the APC led government at the center has done assiduously well, currently, citing the dualization of Niger Bridge, the ongoing reconstruction of the Enugu- Port Harcourt expressway, the Federal government social welfare programmes and the upgrading of Akanu Ibiam International Airport to become a standard international airport, to mention but a few. 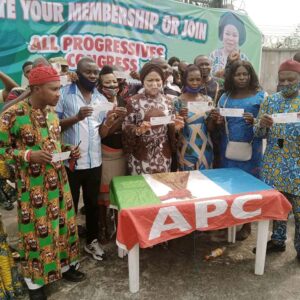 Ugonwanyi Ndi Igbo as fondly called by her teeming supporters concluded by saying that; this is the right time for every well – meaning individuals to join the moving train, which is APC.

In his speech, the leader of the re-validation and registration committee, Alhaji Bala Mohammed Maigari said it’s time for the APC to take it’s rightful place in Abia state. 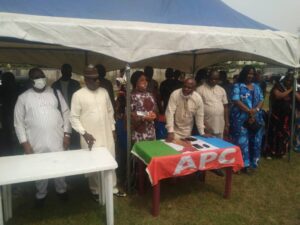 Contributing, the APC, State Party Chairman, Chief Donatus Nwankpa admonished the members of the public to key into the party at the centre for the entrenchment of good governance.

The high point of the event was the signing of APC membership card and the party register in the presence of the visitors.