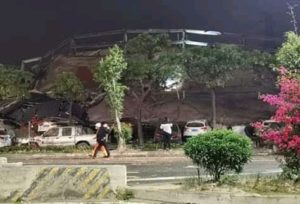 A hotel in China that is being utilized to quarantine coronavirus patients collapsed on Saturday, leaving around 70 people trapped beneath the rubble.

The Xinjia Hotel is located in Quanzhou, in the southeastern Fujian Province, Reuters reported based on information from the city’s government officials.

The 80-room hotel was recently converted to a quarantine facility for people who had recent contact with coronavirus patients, the People’s Daily state newspaper reported.

No reason for the collapse was given.

It comes as a grandfather in his 80s became the second person who died from coronavirus on British soil yesterday.

A woman in her 70s was the first UK victim after being diagnosed with coronavirus while at the Royal Berkshire Hospital in Reading.

The woman – who had ‘underlying health conditions’ – tested positive for the killer infection on Wednesday before succumbing to the illness the following day.

Elderly people are to be told to stay at home under new government guidelines to tackle the outbreak of the virus as health officials urge Britons to check in on their relatives.

The elderly should be prepared for ‘social distancing’ policies, which are to be announcement by ministers next week, government sources said.

Advice will include the elderly staying at home and avoiding crowded areas which the Department of Health warned could leave people ‘cut off’.

Guidelines also state that households should decide how their food will be delivered in case they have to self-isolate.

In total, 164 people in the UK have tested positive for coronavirus, up from 115 cases reported at the same time on Thursday as Norther Ireland confirmed its fourth case on Friday evening.

The Government revealed its four-stage plan earlier this week that includes a raft of socially and economically costly contingency moves as a last resort.

The 28-page ‘action plan’ was agreed at the first emergency Cobra meeting to be chaired by the PM on Monday in which it was explained there are four stages – contain, delay, research and mitigate – to dealing with the virus

You can’t eat from Africa and disrespect us; Rwanda President Kagame says as he deports 18 Chinese nationals