The President, Climate Parliament Nigeria and member representing Ikwuano/Umuahia Federal Constituency, Rep. Sam Onuigbo has said that the projects he attracted cut across party divide and he derives personal satisfaction from doing what is best for his people. 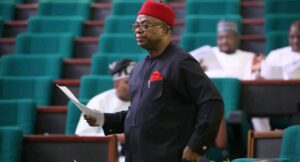 In his speech while commissioning a 500 KVA/33KV line transformer, one of his rural electrification project, at Agbama-Olokoro, Umuahia South L.G.A, of Abia State, Onuigbo made it clear that the projects being commissioned were outcome of his campaign promises to his people.

His words, “In 2014 when I was consulting to run for elections to represent the people of this constituency. I visited about 285 homes within the three local government areas where I pledged that I would be Effective, Accessible, and Responsive to the needs of my people. During the electioneering campaign period, I reiterated this promise. This three pronged base of my political philosophy, boosted by my deep-seated visionary desire to redefine leadership wherever I find myself, has been the spur to every action that I have taken as the member representing Ikwuano/Umuahia Federal Constituency”.

Onuigbo who advised the beneficiaries of the projects to have a change of attitude and maintain them because the projects belongs to them said, “What I can assure our people is that between now and 2023, we will witness an unprecedented level of human and infrastructure development”.

Onuigbo said he is committed to doing the good work and rendering services to his constituents who willingly voted for him.

Ayade pushes for designation of Cross River as export corridor

SO SAD: A Nigerian man,Chisom aka Mikky Miguel Has Died After Being Poisoned By A Friend in Indonesia