The Int’l Society for Civil Liberties and Rule of Law (Intersociety) has raised the alarm, warning that the recently inaugurated government of Prof Chukwuma Charles Soludo in Anambra State might be digging its early grave. 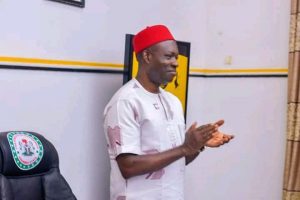 The foremost rights group said in a statement issued in Onitsha, Eastern Nigeria, yesterday, Saturday, April 9, 2022 that it “has identified unguarded utterances, generalizations and lack of credible intelligence as fundamental threats capable of undermining the formative stability of the Government of Prof Charles Soludo” 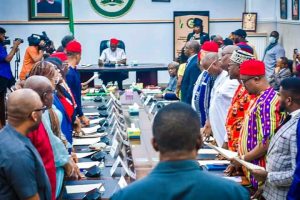 “The person of Prof Charles Soludo may also need to work hard to wriggle himself out of ‘over knowledge mastership syndrome’. This, if not corrected or tamed now, may lead to the new Gov being left or isolated by people of good conscience especially the ‘homeland’ democratic forces in the State. The ‘homeland’ democratic forces in the State have since resolved to join hands with the new Gov to turn Anambra State positively around on condition that their constructive voices must be heard and acted upon when freely given,” Intersociety said in the statement signed by Board Chair Emeka Umeagbalasi; Head, Democracy and Good Governance, Chinwe Umeche Esquire; Head, Civil Liberties and Rule of Law, Obianuju Joy Igboeli Esquire; and Head, Campaign and Publicity, Chidimma Udegbunam Esquire.

Intersociety noted that it is “a global elementary knowledge that sensitive security issues are not handled through unguarded public utterances and ‘generalizations’. It is also instructive to point out that the backbone of security and intelligence in the world lies on detection, thorough verification of the detected and their handling styles anchored on pre action muting on what has been detected and un-muting of same after what has been detected has been operated upon through intelligence and ICT powered operations.”

Continuing, the rights group said: “In Criminology, generalization, false labeling, criminalization and stigmatization of members of a general population or a particular group or associating them with acidic social deviances and violent crimes are the most undoing of any governing authority or policing organization. These are also totally forbidden in modern world of detective and investigative security and intelligence.

“In the Igbo System of ancient and oracular periods, “no matter how wise or knowledgeable an elder is, he must not be invited to preside over a sensitive matter he knows nothing about” and it is tantamount to “killing him” if he ventures into same. That is to say that he must seek to be fully briefed if he is to preside over it well and wisely. In the case of the ongoing formative stage of the Government of Charles Soludo, it is our finding that the Gov meant to govern the State well, but appeared to have chosen to start on riotous and loquacious path. In other words, Intersociety is not certainly sure that the new Gov was well briefed and armed with credible state actor intelligence. Intersociety has severally investigated and found that between 80% and 90% of the state actor security intelligence and investigative information on the state of insecurity in the Southeast are highly disputable and questionable and these have led to wanton waste of innocent lives and destruction of nonviolent properties by deployed armed state actors.

“For instance, in the Southeast, a predominant ‘blue-collar’ or ‘street crime friendly social setting’, it is now the security and intelligence position of the state actors that “the armed robberies and armed robbers, kidnappings and kidnappers, cultism and cultists, rituals and ritualists, murders and murderers, rapes and rapists, vandalisms and vandals, car-snatchings and car-snatchers as well as white-collar or cyber crimes and their criminals have all disappeared from the streets of the Southeast and replaced by “ESN/IPOB terrorism and terrorists”. This is to the extent that out of tribal hatred or ethnic profiling, every act of street criminality is blamed on “ESN/IPOB”. This is even when it is the informed position of the Lombroso and Sutherland or Chicago Schools of Criminology that “the forefathers of Governments and other control systems including soldiering and policing organizations are social deviances and crimes or their deviants and criminals”. In other words, without social deviances and crimes, there could not have been Governments and other control systems. In every ‘blue-collar’ society, ‘blue-collar’ or street crimes and criminals abound and in every ‘white-collar’ or bureaucratic society, white-collar or pen and computer criminals abound.

“In the case of Anambra State, therefore, there is clear lack of credible state actor intelligence regarding the individual and group identities of “citizens in crime” in the State. In other words, in as much as some bush or forest hideouts are held by the armed wing of the mainstream Biafra agitators, motley of violent criminal persons and entities, who patronize street criminalities, also abound in an ‘industrial scale”. The State is also under invasion by several armed splinter groups claiming to be “fighting for Biafra”. Just last week, a solid and credible contact close to Intersociety spotted a brown new Coaster bus marked “Izzi Youth Movement” possibly from Ebonyi State. The Coaster Bus was spotted along Obeledu-Oraeri-Igboukwu Road at about 7.30pm, fully loaded with young men and most likely armed with assault rifles, and on further independent trail and contacts, it was discovered that “they are heading to a camp within the State”. Survivors have also attested to the fact that “they recently encountered some forest camped violent entities/persons In Nnewi South axis (i.e. Ukpor area) speaking Ebonyi dialects and got nearly killed when greeted them with “All Hail Biafra/Nwachineke”.

“There is also the likelihood of the presence of ‘copycat and fifth columnists’ armed squads possibly oiled by clandestinely destructive state agents to engage in sundry violent crimes with intent to blame same on the mainstream Biafra agitators. We are also intelligently and independently not unaware of the fact that there are several urban based violent criminals that specialize in snatching exotic or flashy cars and smart phones and forced or criminal electronic transfer at gun points of several millions of naira. In Idemmili North axis, for instance, an independent detective recently told Intersociety “that the boys go out in the morning with five cars and come back in the evening with fifteen flashy others”. There is also legal difference between “IPOB and ESN members”. In the eyes of UN System, “civilian person ancestrally found within the location of the Bight of Biafra in Nigeria including Gov Charles Soludo of Anambra State is a Biafran” while anybody that is a member of the armed Eastern Security Network engaging in universally outlawed violent activities is deemed to be in conflict with int’l and local criminal laws.

“However, the above is not to say that the armed members of the mainstream Biafra agitators are saint or free from all blames or insecurity and other unsafe conditions in Anambra State. They have also not been responsible for the violent criminal activities in the State. This is more so when patterns and trends of their violent self defense activities are trade-marked, such as “the armed protest” of 7th April 2022 at Nnewi North and Aguata Local Government Area. From our collected intelligence, the attacks had their trademarks and were said to be “a protest through a barrel of gun against Soludo”.

“The beloved new Gov Charles Soludo is hereby expertly advised not to rush IPOB matters to avoid plunging the State into “another Imo State”. Solution to IPOB matters is not short term soluble but likely going to require medium or long term solutions. From our findings, a litany of goodwill still abounds for the Gov to move the State forward developmentally and securely. The primary task before Gov Soludo is: clean the State especially Onitsha, Ogbaru, Idemmili North, Oyi, Awka, Ekwulobia, Ihiala and Nnewi; open up drainages and waterways ahead of this coming rainy season, stop open defecation at Onitsha Upper-Iweka to Niger Bridge axis, identify and rout out touts and criminal revenue agents wreaking havoc in Onitsha and environs, clear blocked drainages across the State of illegal structures, rehabilitate failed State roads and monitor the conducts, activities and movements of his newly confirmed Commissioners especially those in charge of “Homeland (Security) Matters/Affairs” and Finance; the reappointed “mistakes of the Obiano Administration”.”

Concluding Intersociety advised the Soludo administration to “go for fresh and sound intelligence” in a bid to credibly ascertain the following:

*Those among the motley of violently armed persons responsible for incessancy of car snatching including the snatching of exotic/flashy cars from at least seven Catholic Reverend Fathers between Feb 15 and middle of Match 2022 around Ichida, Nnobi, Awka-Etiti, Igboukwu and Obeledu axis