Chukwuma Soludo: The man who will be governor

It is getting increasingly likely that the governorship candidate of the All Progressives Grand Alliance (APGA), Chukwuma Soludo will emerge as the winner of the yet-to-be concluded Anambra State governorship election which commenced on Saturday. 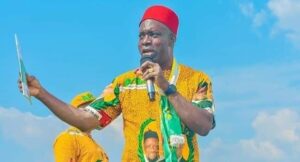 He won Andy Uba of the All Progressives Congress (APC) and Valentine Ozigbo of the Peoples Democratic Party (PDP) in Aguata LGA, the three top contenders’ native council. But the three gladiators had won in their respective polling units.

In a very likely event of the direction of victory remaining till the announcement of the final result, Soludo will begin to receive congratulatory messages for realizing an age-long dream of occupying the number one political office of Anambra State.

In a clime where corruption scandal is a common tag for public office holders, maintaining a spotless public image years after a five-year term of overseeing Nigeria’s number one treasury house is not a common feat. That is the story of the last but one governor of the Central Bank of Nigeria (CBN).

Since leaving the CBN top job, the 60-year old professor of Economics has remained a star, meaning different things to different people who view him from the angles of excellence, integrity, performance or the rest of his core values.

As CBN governor, he demystified the banking sector, performing what most Nigerians thought was impossible, including the banking sector reform, a revolutionary recapitalization exercise that pruned operators with less than N25 billion capital base off the nation’s banking landscape. The motive was to put an end to hitherto recurring bank liquidations that saw customers losing hard-earned deposits.