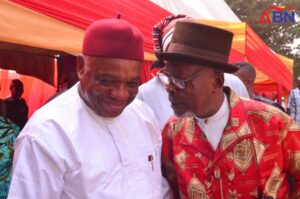 According to Chief Okali, father of Mr. Ifeanyi Okali, Director ABN TV, Sen. Kalu has remained a figure to reckon with in the development of Abia State dating back to his days as governor and now Senator of the Federal Republic.

Speaking with our correspondent on Wednesday, Chief Okali said he has closely monitored the personality of Sen. Kalu whom he said his zeal and passion for an equitable and functional society is not in doubt.

He expressed gratitude to the Abia North Senator for the efforts he has put in place to renew the Senatorial district through massive infrastructural development and youth empowerment.

The octogenarian also thanked Senator Kalu for honouring his invitation last year during his golden jubilee marriage anniversary in Ebem Ohafia, Abia State, describing him as simplicity and humility personified.

While releasing pronouncements of blessing upon Sen. Kalu, Chief Okali prayed God to guide him against enemies and those who do not wish him well.

He urged the Senator to continue making Abia proud with the developmental strides he keeps attracting and effective representation for which he has carved a niche for himself.