A Lagos State High Court sitting at Tafawa Balewa Square heard yesterday that Chidinma Ojukwu was threatened and forced to admit in a statement that she killed SuperTV owner Usifo Ataga. 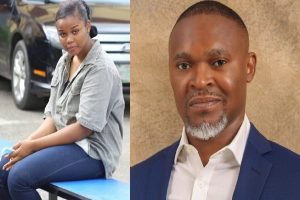 Chidinma yesterday told Justice Yetunde Adesanya at the resumed proceedings that the police tore the first two statements she wrote.

She said she was forced to sign a statement that ASP Olusegun Bamidele wrote and the one that was dictated to her by Olufunke Madeyinlo.

Chidinma said this while testifying in her trial within trial as defence witness one (DW1).

She told Justice Adesanya that Bamidele asked her to rehearse the statement he had written and narrate it to the Commissioner of Police.

Chidinma said that following her arrest, she told the police that she wasn’t involved in the murder.

“He (Olusegun Bamidele) started questioning me and I told them that I knew nothing about the death of Mr Ataga,” she said.

Chidinma said she was taken to the interrogation room of the State Criminal Investigation Department (SCID), Yaba and given a plain statement sheet to narrate what transpired at the short-let apartment.

“When I started writing, he took my left hand and handcuffed it to the chair and I was writing. I wrote what I said at the DSP office,” she said.

“In the middle of my writing, Mr Bamidele took the statement and he read through it. And he said this is not what happened and I told them that this is what happened.”

Miss Ojukwu told the court that before she wrote the statement, she had requested to call her father to ask if he had informed the lawyer about the situation but the police refused to grant her request.

According to her, when she insisted that she wasn’t involved in the murder of Mr Ataga, a certain officer in the interrogation room hit her twice on the back.

She said she was given another blank sheet to write the “truth,” after her first statement was torn.

“And he (Mr Bamidele) said if I do not comply, my family, my dad, sisters and relatives that were arrested will be charged with this murder case,” she told the court.

“Then he brought out his phone, playing the video of the apartment and he showed pictures of Mr Ataga’s body.

“He said now you’re going to write, then I started writing, at the introduction of the statement, he asked why I was slow then I received another slap from the back.

“And I told him that I wasn’t feeling well and that I needed to rest. Mr Bamidele said that there is no time for that. Then he took the statement from me and he started writing and then Mr Chris handcuffed my hands to the chair.”

She further said that Mr Bamidele asked her to read and “rehearse” the statement because the next day I will be taken to the Commissioner of Police and when asked, that is what I should say.

“Then the next day he asked me to sign the statement and I was reluctant. Mr Chris said it is better for me to sign, that nobody is coming for me and that he will provide me with a good lawyer.

“He asked for my name, home address, school, state of origin, how I knew Mr Ataga and the days we spent at the apartment.

“Then Mr Bamidele removed the handcuffs, Mr Chris came for me to sign the statement which I did on the June 24 morning.”

Chidinma said she was given water to wash her face before they entered into the car and drove to Ikeja.

While the rest came down from the vehicle on getting to Ikeja, she was left with Bamidele.

He said, “Should I read the statement for you again? and he read everything and told me to narrate it.

“The commissioner of police asked me what happened, I said the same thing that Mr Bamidele wrote in the statement.

“At the time I came down, I saw my father in a second vehicle in handcuffs.

“There after I was taken to the press then we drove back to the police station where I was told I will be doing a video recording. The video was recorded there in court.”

She said she was taken to the cell on the evening of June 24.

According to her, one Mr Oseni brought her out from the cell and took her to an office where a certain officer Funke and Bola were, after which he left.

Officer Jenyo walked in as Officer Funke brought out a blank statement sheet and told me I was brought in to write a statement. I said I already wrote a statement and I am tired, I have not eaten. She said when I am done I will go and eat.

Officer Jenyo came to stand beside me, took my head and hit it on the table. He said, “we are not here to play and then I picked up a pen and officer Funke said I should start writing. I wrote the date and my name, then she brought a paper that had some writings on it and was dictating. She said, “write what I say”, I wrote all that she had said.”

Justice Adesanya adjourned the case till January 11, 2023 for adoption of written addresses