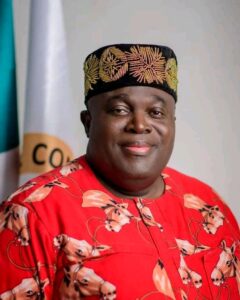 Chidi Izuwah, the Director-General, Infrastructure Concession Regulatory Commission (ICRC). [NAN]
A reliable source from the organisation confirmed to the News Agency of Nigeria (NAN) that Izuwah passed away on Tuesday morning after a protracted illness.
“It is a sad day for us at the ICRC. Chidi Izuwah, Director General of the Commission passed on today,” he said.

He also said that details of Izuwah’s death would be released later.

NAN reports that Izuwah, an engineer, joined the ICRC in 2009 as the pioneer Executive Director, Public Private Partnership Resource Department (ED P3RD) where he set up the Department from scratch.

In this role, he was responsible for catalyzing Public and Private expertise and resources towards putting in place a world class PPP pre-contract regulatory framework and guidelines for driving the preparation and development phase of Federal PPP Projects.

He was confirmed by the Senate as DG in 2019 after serving in acting capacity.

He was a Harvard, Wharton, Columbia University and Indian Institute of Management Ahmedabad Executive Education Alumni.

He started his career as a lecturer in Fluvial Hydraulics and Water Power Engineering at the University of Port Harcourt, Nigeria in 1986.

He was at various times Project Manager and Contract Manager for the Deepwater Bonga Mooring and Installation Contract.