Member representing Bende Federal Constituency Abia state, Rep Benjamin Kalu has said he will not be distracted by allegations he described as frivolous but committed to delivering democratic dividends to his constituency. 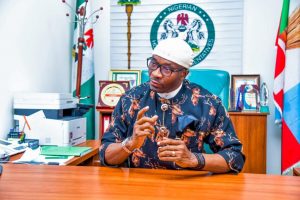 This is in response to allegation of interference with his family without facts or evidence levelled against him by one Robinson Uwak a former member of the House of Representatives who represented Oron, Mbo, Okobo,Ure-Offong/Oruko and Udung-uko federal constituency of Akwa Ibom State at the 7th Assembly.

Featuring in his weekly radio programme, Ben Kalu Mandate on Flo 94.9 Fm Umuahia streamed live by ABN TV and Radio, he described the allegation as baseless and mere distractions by those who are determined to smear his reputation considered to be sparkling for a politician.

According to Rep. Kalu who is also the Spokesperson of the House of Representatives, “There are many people who are waiting to cast aspersions on the integrity of the man called Benjamin Okezie Kalu and if I am not aware of that, I am living in the fool’s paradise. This is the time I should use to speak to my good people of Bende and not to glorify irrelevant issues without facts to it.

“All these things happening is all about Bende, we have brought the dividends of democracy and it is driving some people crazy, getting them worried and they are having sleepless nights but the truth be told, our eyes are on the ball, we are not blinking and anybody who has any dirt should bring it on. We are here to bring more dividends of democracy.

“I will keep working till the election and I am returning to make sure we continue from where we stopped because we have lived in the dark for too long. No amount of threats, smear campaign or defamation, or gang ups , casting aspersion on my integrity that has been upright for the last 5 decades can stop me. I was prepared for this and all that will come with it.”

The lawmaker also mentioned that he had neither met Hon. Robinson Uwak before nor has he spoken to the young lady since her contract expired in 2019, stating that marriage is for mature minds who have the capacity to handle their internal issues especially within the first three years of marriage which he said is always challenging and not bringing it on social media.

He further stated that he will not be speaking on issues that do not have any form of basis or facts with his ex-employee and her husband as she is not his first female staff who has gotten married and managing their homes successfully.

Rep. Kalu emphasized that this is one out of so many allegations thrown at him since his inauguration as a member of the House of Representatives, none of which has come out as true.

He further urged the people of Bende to remain focused and resolute in their demand for good governance, while assuring them of his unwavering commitment to transforming Bende Federal Constituency.