The National Drug Law Enforcement Agency (NDLEA) have uncovered a huge methamphetamine-making laboratory in Asaba, the capital of Delta State. Officials of the agency’s Special Enforcement Team (SET) also busted the masterminds of the major drug trafficking organization when they arrested eight suspects, four of them Mexican nationals, four Nigerians. 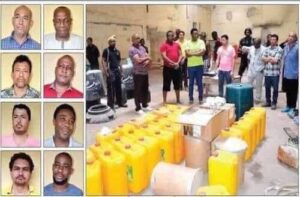 The NDLEA stated that the suspects behind the syndicate were arrested in simultaneous operations in Lagos, Obosi, a town near Onitsha in Anambra State, and at the location of the lab in Asaba.