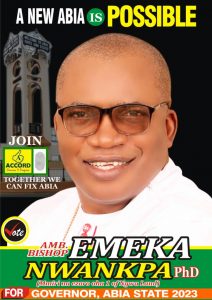 Recall that, ” The Man of God”, Bishop Emeka Nwankpa joined the 2023 Abia State governorship race months ago and during his declaration in Umuahia, promised to change the tear provoking Abia narrative to a testimony of laughter if elected the Governor of Abia state. 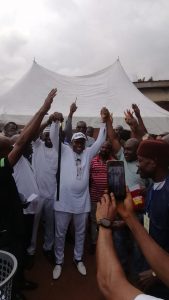 The primary election conducted today, Tuesday 31st May, 2022 at the Accord Party Secretariat in Umuahia, was in orderly manner and in the presence of the state party Chairman of Accord Party, Engr. Uma Ogbonnaya, party officials, Independent National Electoral Commission (INEC) and Security Agencies.

Announcing the result, the returning officer for the primary election, Mr. Ibeh ThankGod said, despite the fact that Bishop Emeka Nwankpa was returned unopposed, that 486 delegates were allowed to cast votes of affirmation, which saw Bishop Emeka Nwankpa scoring 395 votes, with 6 void votes and the rest were absent.

” It’s a thing of Joy that i ve finally emerged as the Governorship Candidate of Accord Party Candidate for 2023 election and i promised not to let Abians down if they can trust me with their votes to be the next Governor of the state”.

“My mission and focus will be to change Abia in four years, my input and developmental strides will be felt in all the 17 LGAs of the State”

“The Abia of our dreams is very possible because it will be actualised using simple methods and guided by conscience and the fear of God ” he affirmed, while addressing Accord Party Abia State executives, party members and supporters.

Amb. Bishop Emeka Nwankpa said his mission is divine because, he has ‘high moral clarity to serve Abians and attributed his coming into the governorship race as one sanctioned by God because when the ‘righteous is on the throne, the people rejoice’

Bishop Nwankpa lamented that Abia has remained grossly underdeveloped and in virtually all the basic necessities that qualify an entity as a state are all lacking.

He queried why Abia state after 30 years, has no government House building of its own, the water taps are ever dry, workers are owed several months of salary arrears, which include the core civil servants, agencies, primary and secondary and tertiary institutions, health workers and pensioners”, adding that as he was busy with his primary elections, that pensioners were protesting in Umuahia, the state capital over several months salary arrears owed them, while primary and secondary school teachers are currently on strike as at today.

He concluded that change is coming to Abia and that change is possible through Accord Party, while urging Abians to join the change train to lift Abia because, we have no other state.