Ahead of governorship election in Abia next year, an aspirant on the platform of All Progressive Grand Alliance, APGA, Sir Chikwe Udensi has announced General Chukwu Mbibi (rtd) as Chairman of his campaign council. 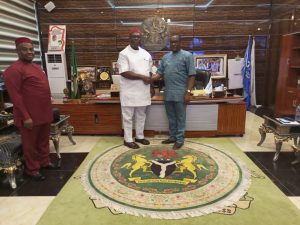 Also appointed as in the Chikwe Udensi Campaign Council is Professor Casmir Obialom who will act as Secretary of the Coucil.

In a statement made available to ABN TV on Thursday, Sir Udensi said other members of the Council will be announced next week.

This comes barely 24 hours after he said he will go ahead to unveil his campaign team despite a protracted legal battle on who the rightful governorship candidate of APGA is in the party.

Prof. Gregory Ibe who before now was the party’s governorship candidate in the state was about 2 weeks ago sacked by a Federal High Court in Abuja presided over by Justice Binta Nyako.

The court granted the prayer of Sir Udensi who initiated the suit by voiding the primary election which produced Prof. Ibe and ordered a fresh primary within 14 days.

The party is yet to act on that even as the 14 days window runs out.

Udensi has said he will file a cross-appeal and urge the court to declare him the authentic candidate of APGA governorship candidate in Abia.

Udensi who vied for the party’s ticket had alleged that the primary election which produced Prof. Ibe was fraught with irregularities, a ground upon which the primary was annulled.

General Chukwu Mbibi (rtd) hails from Ikwuano, Umuahia Central while Professor Obialom, an erudite academic will be the secretary.