Islamic scholar and mediator, Sheikh Ahmad Abubakar Gumi has revealed that Boko Haram has been trying to buy kidnapped students from bandits. Gumi made this revelation and more during a recent interview with Channels TV. 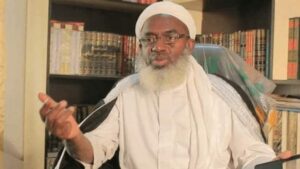 Latest among such kidnappings is the abduction of students by gunmen from Greenfield University, Kaduna state. Some of the abducted students have been killed with one student released. The parents of the affected students however claim that they have paid millions of Naira to the kidnappers, but their children are yet to be released.

Speaking during the interview with Channels T V, Gumi recalled that Boko Haram tried to claim responsibility for the abduction of Kagara boys from Niger state, but it was later discovered that Boko Haram was bargaining underground to buy the boys from the kidnappers.

He stated that the kidnappers refused Boko Haram’s offer which eventually lead to the release of the students.

Gumi also revealed that the situation of the abducted students of Greenfield University is unique because, for the first time, there is a cooperation between some bandits and Boko Haram elements. The scholar refereed to such development as a ‘bad symptom’ since Boko Haram is now encroaching into the field.

According to Gumi, the involvement of Boko Haram into the kidnapping led to the killing of some abducted students of Greenfield University, but the Bandits involved in the kidnapping decided to speak against it.