November 1, 2021, while the tired sun melted into the bleak horizon and the azure sky slunk into dusk, real estate guru, Wale Bob-Oseni, detoured from his trip to the airport, into the eternal dark. 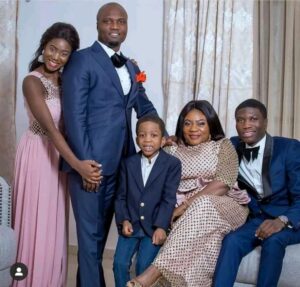 That Bob-Oseni got crushed to death in the 21-storey rubble of his friend, Femi Osibona’s high rise building is public knowledge.

But very few people know that he suffered such grisly death at the prime of his life. Just at the cusp of 50.

He probably went quietly or in excruciating pain. Whatever the manner of his departure, the real estate guru went poorly into the deep, dark rubble of his friend, late Osibona’s 360 Degrees Towers’ 21-storey contraption. Unlike many a departed soul of his stature, he did not receive a grand burial.

The Executive Director of the African Bureau for Legislative Empowerment is yet to be interred six feet under the earth hence he probably wanders dissatisfied, like a tormented wraith seeking peace in unlikely places. Nobody knows the actual fate of the real estate magnate at the time of his death. Nobody knows either what final thoughts flashed through his mind. Did he rue his sad, sudden end? Did he regret, knowing his planned 50th birthday would eventually pass as his funeral?

On his way to the Murtala Mohammed International Airport (MMIA), en route to the US, Bob-Oseni reportedly stopped by at Osibona’s Ikoyi building site at the latter’s behest.

The real estate dealer and executive director of the African Bureau for Legislative Empowerment, was on his way to the US on Monday when he got a call from Osibona, owner of Fourscore Homes, to check out the ongoing development at Gerard Road, Ikoyi, Lagos state.

Alas, the building collapsed with Bob-Oseni and Osibona inside, and they are now presumably dead after 72 hours of rescue efforts.

In a video that went viral some minutes after the collapse, a man believed to be Bob-Oseni’s driver was seen crying, saying he was to take his boss to the Lagos airport.

“He was heading to America. I want to go and drop him in the airport,” the driver said in tears.