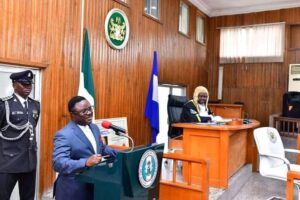 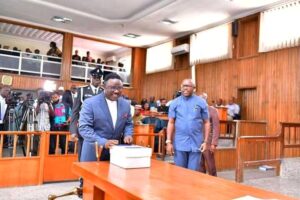 Explaining the title of the budget, Ayade disclosed that It’s conjugated agglutination because “it is a cascade of so many projects, back to back to ensure their completion. Putting all together to form a new envelop, that when it explodes you will see a new prosperity agenda.”

The Budget which is markedly different from the previous year, according to the governor, focuses on the completion of ongoing projects like the Obudu Cargo and passengers International Airport, Obudu British/Canadian International School, the Odukpani Junction flyover among many others.

Also constituting the focus of the 2022 budget, Governor Ayade said it seeks to ensure the sustenance of his administration’s policy of regular payment of salaries.
The governor announced provision in the budget to set aside between N30 to N50 million monthly for the payment of gratuity for retired civil servants in the state.
Additionally, Governor Ayade said the Appropriation Bill will mirror projects aimed at generating immediate income for the state and impact directly on the people.