NewsMirror September 16, 2019
The United Nations headquarters in New York has conferred Special Consultative Status on Vicar Hope Foundation under the UN Economic and Social Council. With this…
Continue Reading

NewsMirror September 16, 2019
Co-founder of BudgIT, Seun Onigbinde, on Monday, announced his resignation as the Technical Adviser to the Minister of State for Budget and National Planning,…
Continue Reading

NewsMirror September 16, 2019
Nigerian reggae musician, Majekodunmi Fasheke, popularly known as Majek Fashek, is dead. Akelicious gathered that the artist, who has been receiving treatment and battling for…
Continue Reading

NewsMirror September 16, 2019
The police in Lagos have arrested a 34-year-old man Innocent Ifunayachi for allegedly drugging and raping a teenage daughter of his host. The suspect was…
Continue Reading 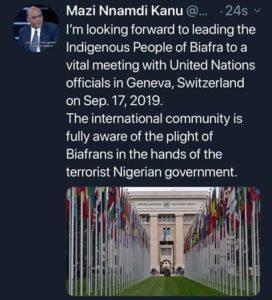 Leader of the proscribed Indigenous people of Biafra (IPOB), Mazi Nnamdi Kanu will on Tuesday lead a delegation to the UN office in Geneva, Switzerland.

The Media and Publicity Secretary of the group, Emma Powerful who disclosed this on Sunday in a statement, however said the details of these meetings would not be made public.

The statement partly reads: “Going by the relentless engagement of the international community by our great leader Mazi Nnamdi Kanu, we the global family of the Indigenous People of Biafra (IPOB) consider it imperative to inform the great people of Biafra, friends of Biafra and lovers of freedom that in keeping with the promise of our leader during his last outing at the EU, he will be leading a delegation to the UN office in Geneva Switzerland on Tuesday 18th September 2019.

“As usual details of these meetings will not be subject to public disclosure as we are well aware of the lengths the corrupt, fraudulent and election stealing cabal will go to hamstring and frustrate our efforts.

“Not many people know that Nigerian Ambassador to the EU personally rang Seb Dance the Member of European Parliament that invited our leader to the EU, to try bullying him into cancelling the event.

“Anytime we make public our critical diplomatic engagements, the corrupt Nigerian Government has used their considerable wealth and clout of sovereignty to cajole, buy-off, bribe, intimidate and threaten their business interests in Africa.

“Nigeria it must be said, sent two female diplomats from the Ministry of Foreign Affairs to observe our leader’s presentation at the European Parliament.

“Our leader even walked across to these diplomats after the event to thank them for coming.

“Any Nigerian or agent of Nigeria that wants to know the outcome of the Brussels outing should ask the Ministry of Foreign Affairs, after all two of their diplomats were there to hear our leader speak.

According to the statement, Kanu, would during the trip, engage in a series of meetings and would for the first time officially present to various UN agencies and bodies a catalogue of serial killings, abductions, massacre and ongoing reign of terror in Nigeria against Biafrans.

“It is our stated intention to bring the human tragedy that Nigeria has become to the attention of the civilised world.

“For the avoidance of doubt and possible misrepresentation or interpretation, our leader Mazi Nnamdi Kanu and his team will appear before the great men and women of the world at the UN headquarters in Geneva and not the General Assembly in New York as being speculated in some quarters.

“Our demand for the recognition of the right of Biafrans to self-determination and the need for urgent intervention of the civilised world in order to avert looming catastrophe will continue to gather momentum.”

While calling on Biafrans living in Switzerland and other European countries to come out to support its leader and his team on the landmark occassion, the group restated its resolve never to stop until Biafra was restored.

“It should be recalled that our leader explicitly stated during his visit to EU Parliament that our next move will be to the UN and after that Washington DC. Today we are glad to say the UN visit is set and in the coming weeks, we will be in Washington DC.

“IPOB is fighting very strongly on all diplomatic and legal fronts to ensure that the right of Biafrans and other trapped ethnic nationalities in Nigeria to self-determination is upheld. We will not leave any stone unturned in our quest to accomplish this.” the statement added. END_OF_DOCUMENT_TOKEN_TO_BE_REPLACED

NewsMirror September 15, 2019
After a decade of devastating war with Boko Haram extremists, they are now better armed than ever and have more sophisticated drones than the demoralized…
Continue Reading