The All Progressives Congress and the Peoples Democratic Party on Thursday stepped up moves to choose running mates for their presidential candidates. 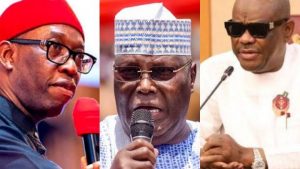 The PDP set up a committee comprising its governors, the National Working Committee and the Board of Trustees members as well as former governors with the mandate of picking its vice-presidential candidate.

The committee met on Wednesday and Thursday in Abuja. The PDP spokesman, Debo Ologunagba, confirmed the setting up of the committee last night.

It was gathered that the Rivers State Governor, Nyesom Wike, and his Delta State counterpart, Ifeanyi Okowa, had intensified lobby of the PDP stakeholders as part of moves to clinch the post.

On his part, the APC presidential candidate, Asiwaju Bola Tinubu, on Thursday, began the search for his running mate with a meeting with northern governors.

The commission had on May 27 extended the deadline for parties to conduct primaries from June 4 to June 9.

It also fixed June 17 as the deadline for parties to submit lists of their candidates.

At the PDP primary held on May 29, former Vice-President Atiku Abubakar, who emerged as the presidential candidate, polled 371 votes while his closest challenger, Wike, came second with 237 votes.

On Wednesday, Tinubu defeated aspirants including a former Minister of Transportation, Rotimi Amaechi and the Vice-President, Prof Yemi Osinbajo.

On Thursday Atiku met with the PDP governors as part of efforts to pick his running mate.

Ologunagba in an interview indicated that the PDP would announce its vice-presidential candidate next week.

He, however, declined to reveal the names of those being considered as the running mate.

He said, “Yes, we have set up a committee on the running mate; when it comes out with its decision, it would be announced. We don’t do things by speculations. There is a process, we don’t work without planning. We would follow due process, we consult, that’s what we are doing.

On the efforts to reconcile the aspirants who lost during the primaries, the party said a reconciliation process was ongoing.

It was gathered that Wike and Okowa had reached out to their fellow governors as part of efforts to clinch the post.

A close source said that the governor was in Abuja lobbying to be named Atiku’s running mate.

The source stated, “The governor is not in town as we speak. It is not out of place if he is pushing to become the running mate of the PDP presidential candidate, Atiku Abubakar.

“But it will be unfair if he (Wike) is not picked as Atiku’s running mate going by his contributions to the party, both in terms of finance and other levels of support.

“Don’t forget that he came second in the PDP presidential primary in Abuja, so that tells you his pedigree,” he stated.

Kelvin Ebiri, the Special Assistant on Media to Wike kept mum over the choice of running mate for Atiku.

When contacted by one of our correspondents if his principal should be picked as the vice presidential running mate, although Ebiri picked his call, he did not speak.He also did not reply a text message sent to him

On his part, the Chief Press Secretary to the Delta State governor, Mr Olisa Ifeajika, confirmed that the governor was one the people being tipped as Atiku’s running mate.

Ifeajika said Okowa was eminently qualified for the post. He said, “Yes, they (governors) met yesterday and today, Thursday, in Abuja. Of course, it is no longer news that the Governor Ifeanyi Okowa is among the people being tipped as the running mate.

“Okowa is one those being considered. He is not only eminently qualified but acceptable by all. If there is an election, all governors, even those in the APC, will attest that Okowa is the best man for the position. He has worked hard for it.”

A source close to the Sokoto State Governor, Aminu Tambuwal, told The PUNCH that the governor believed the party should pick somebody who could mobilise votes for the party.

Meanwhile, the PDP presidential candidate on Thursday met with some former PDP governors.

The meeting which was held at Jimmy Carter, Asokoro, Abuja, focused on how to strengthen the opposition party amidst the crisis rocking some state chapters of the party.

Atiku was also scheduled to meet with former ministers who served under the PDP administrations as part of moves to present a formidable front and get the input of stakeholders on the choice of a running mate ahead of the 2023 presidential poll.

Atiku’s spokesman, Mr Paul Ibe, confirmed to one of our correspondents that the Thursday night parley was part of the ongoing consultations by the former vice-president to build a formidable party ahead of the polls.