At least 20 dead, 156 persons declared missing, after a boat mishap due to overloading in Kebbi

The National Inland Waterways Authority (NIWA) has declared 156 persons missing in the boat mishap which occurred in Kebi State on Wednesday. Mr Yusuf Birma, NIWA area manager in Yauri Kebbi State, disclosed this, adding that the accident was caused by overloading. 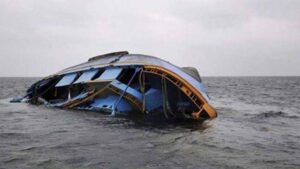 Birma said rescue operation is still ongoing but added that four people have been confirmed dead, 20 rescued alive while 156 people are still missing. 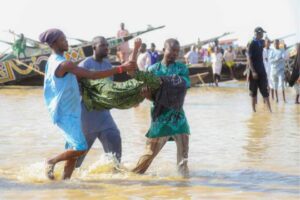 “The boat is carrying 180 passengers with 30 Bajaj motorcycles. The victims were going to a market in Malele in Borgu local government area of Niger state from Kebbi and the incident happened just one hour into their trip. We are still rescuing the victims; the mishap occurred as a result of overloading.

The boat capacity is not up 180 passengers it carried, as we speak, only 20 people have been rescued alive, four dead confirmed while the remaining 156 people are still missing and they are believed to be underwater,” he told reporters. Speaking further on the cause of the mishap, Birma added that most of the boats are old and weak.

However, President Buhari in a statement issued on Wednesday by his spokesman, Garba Shehu, commiserated with the families of the victims. 📷: BBC