The Minister of Labour and Employment, Senator Chris Ngige has congratulated the winner of the November 6, 2021 Anambra State Governorship Election, Professor Chukwuma Soludo of the All Progressive Grand Alliance (APGA). 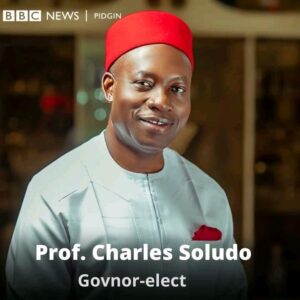 Senator Ngige, in a goodwill message by his Media Office Wednesday, congratulated the former Governor of the Central Bank of Nigeria (CBN) for a resounding victory in the poll, saying it is a victory well deserved.

He said, “Ndi-Anambra have spoken with this resounding victory. Having contested in 2010 with Soludo, who was then the PDP candidate and myself in ACN; an election in which I was ‘awarded’ the second position even though I won outright and Soludo third, I knew that with his tenacity of purpose and drive, he would one day make it to the seat of the Governor of Anambra State.
“It is a case in patience and endurance, an aspiration nurtured to serve the people with all his strength, I seriously believe. Ndi-Anambra I know, will hence, entertain no excuses . Much has been given, hence the expectation is very high. Knowing Soludo as I do however , I have no doubt that our people have made an excellent choice by voting him. ”

Sen. Ngige also congratulated the Independent National Electoral Commission (INEC) for conducting a free, fair and credible election, even with the initial hiccups posed by the malfunctioning of the Biometric Voters’ Accreditation (BVAS) system in some places.

“ A solid opportunity is here offered to INEC to brace up to the challenges posed by the Anambra Election, which he labeled “a guinea pig election ” especially with the debut of the BVAS technology for a more credible, free and fair elections in future.

“ At this auspicious juncture, the President of the Federal Republic of Nigeria, President Muhammadu Buhari deserves a glowing national tribute. I put on record, that Mr. President had on three different occasions, assured through me, that the Anambra governorship election would be free and fair.
“The last of such occasion being on October 14, 2021, when I conveyed the fear and the consternation of the religious leaders , elder statesmen and traditional rulers of Anambra State, more especially that of his friend, the Archbishop of the Onitsha Metropolitan Province, His Grace, Dr. Valerian Okeke to him in his office.
“Not only did the President ensure a level playing field for all the political parties , he directed all the security agencies to deploy into Anambra to protect and secure voters and electoral workers. A promise kept!
“ Worthy of commendation in this direction, is the professionalism exhibited by the security agencies – the army, police, DSS and the Civil Defence during the exercise, in compliance with the wish of the President for the good people of Anambra State .

“ The election has come and gone and it is very free, fair and credible. Mr. President has in deed lived true to his assurances to Ndi-Anambra and by this very fact, demonstrated once again, that he is no enemy to Ndi-Igbo. What a better value to democracy, than a legacy of credible elections, in which the will of the people reigns supreme. May we therefore hail this true democrat!

Continuing, Ngige appealed to all those who contested the exalted position with Professor Soludo to sheath their swords.
“ Only one person would emerge a winner in this contest, more so, when the seat of the Governor of Anambra State can only be occupied by one person at any given time. I therefore urge the other candidates to be good losers and join hands with the Governor-elect to give the state the best.

“As an elder statesman in the state, I have no choice than to irrevocably stand with my dear Ndi-Anambra in their desire for an unfettered freedom to choose their leaders. It is a legacy we must bequeath to the posterity of our people.

“Similarly, I urge Professor Soludo to be magnanimous in victory . Time is here for him to reach out to everybody, including those who aspired with him in his APGA, as well as others who contested on the platforms of other political parties, notably, the PDP, APC, YPP and ZLP, so as to join hands to elevate and restore our state to its enviable position in Igbo land and Nigeria in general .
“ There is no doubt that our dear state, visibly veered off the track of progress since the last three years, when the incumbent Governor started suffering from a second term gubernatorial fatigue.

“On my own part, I’m willing to assist him consolidate the gains made by the previous governors. I will make available to him, human and material resources, to make another successful Governor in our dear State.
“Instructive also, is that our hands of fellowship to Professor Soludo is reciprocal, him being a leading member of the Presidential Economic Advisory Council(PEAC) that has been assisting the President’s Economic Sustainability team, led by His Excellency, the Vice President in getting our economy out of the doldrums with the COVID-19 pandemic .”

“ I want to also thank the Anambra electorate for coming out despite all the fears of violence, killings and kidnappings, weeks before the election.
“In commending them, I also thank the “known and unknown gunmen” for seeing reason with the elders that Ndi-Anambra be allowed to vote for the leader of their choice.

“May God continue to bless Anambra State while we collectively work to take it to a greater and more enviable height,” the statement added.