AS the Nigerian Pentecostal family mourns Pastor Dare Adeboye, son of he General Overseer of the Redeemed Christian Church of God (RCCG), Pastor E.A. Adeboye, who passed on last Thursday, another General Overseer is bereaved. 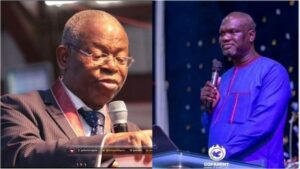 Sunday Vanguard could not confirm the circum[1]stances of Emmanuel’s death, but a source close to GOFAMINT said he was until his transition, the Pas[1]tor in charge of the Kingdom House Assembly of the church located in Festac Town, Lagos. The deceased was also said to be the Director of Mediaof GOFAMINT, a position he took on part-time basis, while he was also the rallying point for youths in the church.

This January, Emmanuel was appointed into GOFAM[1]INT Executive Council for a three-year term. A statement by the church announcing the demise, signed by GOFAMINT General Secretary, Pastor S.O. Omowumi, said: “With heavy heart but in total submission to the sovereignty of the Supreme God, we announce the passing onto glory of our brother, our pastor and a member of the Executive Council of The Gospel Faith Mission International (GO[1]FAMINT), Pastor Emmanuel Folorunso Abina, on Wednesday, 28th April, 2021.“Gone too soon but we praise the Almighty God for the life Pastor Folorunso lived and the indelible impact he made in the church, particu[1]larly among the youth.

“May the Lord Jesus Christ comfort our General Over[1]seer, the immediate and ex[1]tended family as well as the church”. Meanwhile, a commendation service for Dare Adeboye will be held in Eket where he was Regional Pastor today. The deceased was the “miracle child” and the second biological son of Pastor Adeboye. He was his father’s look alike.

According to a release by the family, the body of the de[1]ceased, lying cold in the morgue of Babcock University, Ilisan-Remo, will be taken in a motorcade to the Redemption Camp—-the city which was created by his 79- old-father—-where Pastor D, as he was fondly called, will finally rest in the vault there