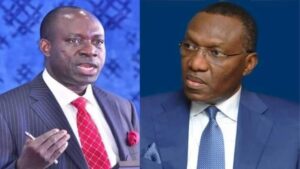 A former National Chairman of APGA Senator Victor Umeh, stated this at a press briefing at Aguluizigbo in the Anaocha Local Government Area of the state, adding, “Anambra State is not Imo”.

Uba had alleged that APGA did not win the election, citing alleged irregularities.

He vowed to upturn in court the declaration of Prof Chukwuma Soludo of APGA as the winner of the election by the Independent National Electoral Commission.