Barely 24 hours to the Saturday Anambra State governorship election, the Inspector General of Police has removed the Deputy Inspector General, DIG Joseph Egbunike as the head of the team for the election. 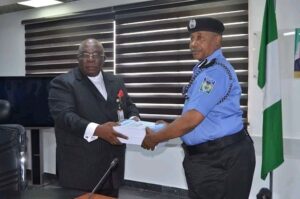 Though when contacted on the development, Force Public Relations Officer, CP Frank Mba confirmed that DIG Egbunike has stepped down, no reason was given for the removal of the experienced senior officer who is an indigene of Anambra State.

DIG Egbunike has since been replaced with Acting Deputy Inspector General of Police in charge of Operations, DIG Zaki Ahmed.

Public Relations Officer attached to the Anambra Election Monitoring Team, DSP Nkeiruka Nwode while announcing the sudden change of baton said the development would not affect the conduct of the election.

Vanguard investigations showed that the decision to remove DIG Egbunike may not be unconnected by concerns that as a son of the soil, the gubernatorial gladiators may subsequently point accusing fingers at him depending on who emerges victorious or otherwise

Recall that the Inspector General of Police, IGP Usman Alkali Baba while in Anambra recently assured residents of the state of adequate security noting that the Police operatives have no reason to compromise having been paid their allowances ahead of the special duty.