AN ENCOUNTER WITH PROF. UCHE IKONNE By Chimezie Ozems

Let me start from the priam of personal introduction. I’m from Umuosievula Nsulu in Isiala Ngwa North LGA. The name of my community was shortened to Umuosu by the white colonialists to enable them to pronounce it well. 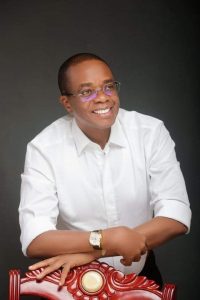 Agburuike Nsulu, the country home of the Abia PDP governorship candidate and erudite Professor of Optometry, Uche Ikonne, is among the communities that make up Nsulu clan. I had visited Agburuike Nsulu in the past but on this very occasion, my mission was to interview Prof. Ikonne. 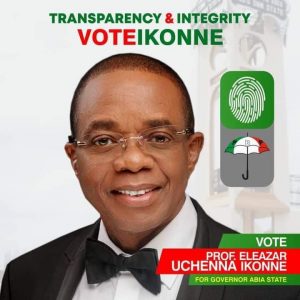 Agburuike, known for their ikoro cultural festival, has become a political mecca of sorts. Abians of voting age know what they want. They don’t want those I may refer to carrier/professional politicians to superintend over our affairs again.

That explains why groups and notable Abians embark on pilgrimage to identify with the PDP governorship candidate. During our journey to Agburuike, I held my ritual even in soliloquy.

Unbeknown to my professional colleagues, I was asking myself while the “touch” should point towards an iconic professor who should have been allowed to take his well deserved rest after an eventful carrier in the academia.

I was deeply concerned about Prof. Ikonne’s age because of how tedious the act of governance is. When members of Ukwa Ngwa Council of Elders led by Dr. Max Nduaguibe visited him with the aim of convincing him to run for the governorship seat, did they consider his age? Mind you, 66 is still considered an active age. He is younger than some people at the corridors of power. 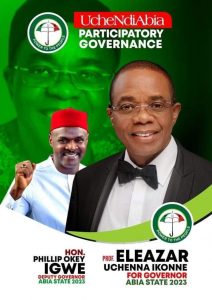 I was concerned because of some unsubstantiated comments and articles coming from the opposition camps. Politics, especially in Nigeria, is very intriguing, full of absurdities.

I failed to realise that disinformation and propaganda are age-long tools used mainly by the opposition against candidates that have an advantage over them. Since Prof. Uche Ikonne declared his intention to run for the highest political office in Abia State, he has become the target of the opposition.

I have noticed that since the beginning of the present political dispensation, the efforts of the opposition to gain favour went on overdrive. The opposition parties are aware that Prof. Ikonne is qualified to succeed the incumbent Governor Okezie Ikpeazu because of his pedigree, experience, exposure and high ranking integrity. They shifted attention to his age.

Placing emphasis on Ikonne’s age doesn’t hold water and it will not fly. It can be likened to the age-long proverb of a boy’s inability to kill the bush rat. He explained his failure by saying that the bush rat’s sweet delicacy when prepared with scent leaf eats faeces.

When I encountered Prof. Ikonne, he spoke for more than two hours both in the English and Igbo version of the interview. He passed a strong message that he’s first and foremost a teacher. Of course, a teacher is an organizer, a manger, a disciplinarian and a leader.

After the interview, I entered another round of soliloquy. I asked myself what has age of a 66 year old professor got to do with performance in governance?

I saw in Ikonne, a sound mind in a sound body. A man who is capable of taking Abia State to a new level. A man who is in a hurry to replicate his success story as seventh vice chancellor of Abia State University, Uturu to the larger society.

It might interest us to know that the current president of the United States, Joe Biden is 79 and he has proved that despite his age, he is capable of ruling the most powerful country in the world.

As we left Agburuike Nsulu after the marathon interview, I was convinced that Prof. Uche Ikonne is the right man for the job because he is alert, capable and has a knowledge of what he wants to do. In other words, he is capable as much as he has the capacity in all capacities.