Officers of the Western Nigeria Security Network codenamed Amotekun have arrested 4 suspected criminals; a Yoruba man, a Togolese and two Fulanis, responsible for robberies along the Ilero to Iganna Road in the Kajola local government area of Oyo state. 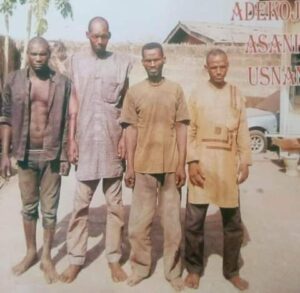 The men were nabbed on the 2nd of February, 2021 and were said to have carried out robbery operations along Ilero to lganna Road on the 28th and 29th of January.

According to the report, the criminals barricaded the highway with tree trunks and began to rob innocent travellers of their money and belongings.

During the interrogation by the officers of Amotekun, the Togolese and Yoruba man confessed that they carried out four operations on that road with three local guns.

The Fulanis, however, denied the allegation, claiming that they were innocent.

The suspects have since been handed over to the Oyo State Police for proper investigation and arraignment for their crimes.

PDP will Bounce Back in Bende – Gov. Ikpeazu declares as Hon. Nnenna Ukeje returns Posted by News Mirror, 12 May, 2021