AGRICULTURE REMAINS KEY TO OUR SURVIVAL AS A PEOPLE AND AS A NATION. ~~ Ikpeazu 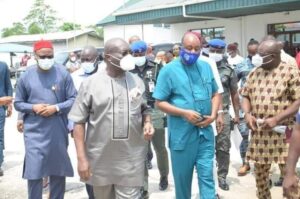 Governor Ikpeazu who was speaking when he received in audience a delegation of the Executive Secretary and Chief Executive Officer National Agricultural Land Development Authority (NALDA), Prince Paul Ikonne at Government House, Umuahia noted that his administration had on assumption of office mainstreamed Agriculture as an alternative source of income as it provides industrial raw materials and capable of providing job opportunities. 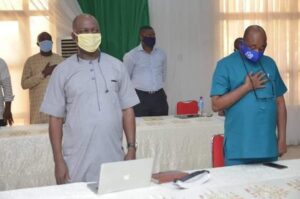 The Governor while also describing Agriculture as as key for the survival of any society, regretted that if not for the ravaging covid 19 pandemic, his vision of establishing Cottage Industries in some parts of the state would have been realized. He stated that his administration had placed orders and paid for machinery for the establishment of some cottage agro industries from Tiny Tech Corporation of India but the movement of the equipment was hampered by the advent COVID-19. 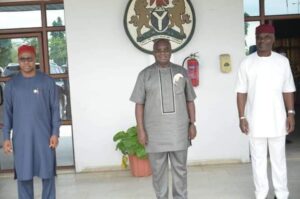 He urged Prince Paul Ikonne to approach his new position from a multi -sectorial angle and look for a possible way of assisting in addressing the menace of soil and gulley erosion ravaging various parts of the state and requested a letter from the people of Ukwa West supporting the possible hand over of the Ogwe Golden Chicken Company to NALDA for resuscitation.
The State Chief Executive expressed the preparedness of the State Government in providing necessary support for the success of the pilot stage of the National Youth Farmers Scheme for which Abia has been selected to be participating in the pilot stage.

Describing the visit as a home coming, the Governor described Prince Paul Ikonne as a worthy and proud son of Abia State who has also served the people of the State in various capacities. He thanked Mr President for finding him worthy of such high elevation and expressed confidence that with his known passion for hardwork, he was confident that the new Executive Secretary will deliver on his assignment.

Speaking earlier, the Leader of the delegation and Executive Secretary National Agricultural Land Development Authority (NALDA) Prince Paul Ikonne said that NALDA has been revived by President Muhammadu Buhari as a result of his passion ensure food security across the country.
Prince Ikonne said that they have designed some programmes including Back to Farm, the National Young Farmers Scheme towards driving young youths to farm with a view to creating jobs.
He noted that two processing centres are to be cited in the state by the agency and expressed satisfaction that many communities in the state have started donating lands for various Agricultural value chains of the Federal Government.
He also informed the Governor that prominent indigenes of Ukwa West LGA had approached his agency with a request to help resuscitate the Golden Chicken Farms at Ogwe, and that once the State Government approves, NALDA will take further steps in this direction.

Deputy Governor Sir Ude Oko Chukwu, some members of the State Executive Council including the Commissioners for Lands and Information, Barrister Suleman Ukandu and Chief John Okiyi Kalu respectively, the State Coordinator of the Livelihood Improvement Family Enterprises, Niger Delta (LIFE-ND), Dr. Uchenna Onyeizu and other stakeholders in land and agriculture were part of the event.