Gunmen suspected to be kidnappers have been shot dead in Edo State.

The suspects met their waterloo along the Benin-Auchi road on Wednesday. 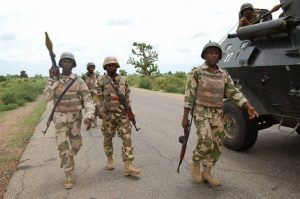 They had reportedly engaged security operatives in a gun battle at Okwo community in Ehor, Uhunmwode Local Government Area of the State.

The kidnappers were said to have blocked the road on Tuesday morning, but they were forced into the bush after a gun battle which lasted over an hour.

A stray bullet hit an unidentified SUV driver on the shoulder while motorists and commutters were stranded for several hours.

The suspects had returned to the road on Wednesday morning, attempting to kidnap travelers they but were engaged in another gun fight, leading to the deaths of three of them.

“Yesterday [Tuesday] at 0620hrs in Ehor area, a combined team of the police and the military foiled a kidnap attempt. Nobody was kidnapped, one person, a young man driving Lexus 350 was hit on his shoulder.

“Today (Wednesday), the hoodlums came out again and three of them were gun down by the combined team of the police, military and vigilante. Edo must be safe,” he said.