ABSUTH TURN TO SEN.KALU FOR INTERVENTION OVER 18 MONTHS UNPAID SALARIES, OTHERS

“The average person in Abia cannot access health care,we are pleading with you sir to come to the aid of doctors in Abia State” these were part of the words of appeal by the Abia State Chairman of the Nigerian Medical Association(NMA), Dr. Okwuonu Chimezie to the Chief Whip of the Senate , Senator Orji Uzor Kalu during their courtesy visit his Igbere country home. 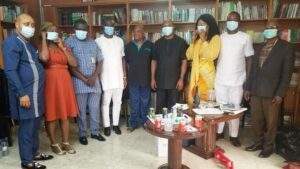 Pained by the non-payment of their 18 months salaries and other pressing issues Doctors of the Abia State University Teaching Hospital (ABSUTH) under the Nigerian Medical Association (NMA) on Monday took their plight to the home of former Governor of Abia State , Senator Orji Uzor Kalu.

The Doctors who spoke through the NMA lamented the deteriorating state of the teaching Hospital, according to them due to the non-payment of their 18 months salaries, doctors in the state have become demoralised which has in turn affected Healthcare delivery in the state.

Dr. Okwuonu in his speech disclosed further, that due to the anomaly hundreds of doctors have since migrated from the state’s teaching hospital in search of greener pastures to other states and abroad. He lamented that unlike in the past ABSUTH was no longer competitive he emphasised that the sector deteriorated so badly asking Senator Kalu to intervene.

Okwuonu commended Senator Kalu’s strides in the health sector during his tenure as Governor which include building and relocating ABSUTH to its permanent site, consistent payment of workers salaries amongst others. According to. Okwuonu Senator Kalu as Governor of the state repositioned the state’s health sector which produced medical doctors that are currently pioneering so many sectors of the medical field both national and international sectors.

In his words” You built and transferred the Abia State Teaching Hospital to its current site and that teaching hospital as at the time you were the Governor of this state(Abia) produced so many medical doctors that are currently pioneering so many sectors of the medical field both national and international sectors.

“In fact one of the key neurological surgeons in the world today is a graduate of ABSUTH and a good number of them are playing key roles in the United States of America and the United Kingdom in ensuring that health care delivery is sustained in these places.

He continued, “Our major aim for visiting you today is to intimate you of our plans to partner with you to continue to deliver health care in that teaching hospital. You may also be aware of the current state of the Teaching Hospital, it is not a hidden secret that workers in that hospital are demotivated, as we speak the medical doctors and other health care workers are owed salaries to the tune of 18 months and the motivation in ABSUTH is very poor. All the workers under the umbrella of Joint Health Sector Union (JOHESU) are on strike and health services have been grounded for months now.

Okwuonu appealed to Senator Kalu to deploy his numerous influence regardless of political affiliation to intervene so that the workers salaries would be paid and to also improve the health care delivery in ABSUTH.

He said ” We know that people like you have the reach to attract NGOs and other foundations while on our side we can provide the requisite man power in any area you need it to ensure that your mission and your dreams and your lofty ideas are carried out. Another issue is we have an NMA house that we are currently building , so we need your assistance to see that the building is completed because the building will take care of the welfare of the doctors in Abia State, the building will serve as a secretariat and event center for hosting our programmes.

In his response the Chief Whip thanked the association for the visit, he disclosed his readiness to partner with the association with his Non Governmental Organisation (NGO) and others to improve the health care delivery in the state.
” we have a foundation that has been a lot , particularly in the health sector, recently we went on a medical outreach to Internally Displaced Persons (IDPs) Camps. We distributed drugs to vulnerable persons , so this visit is good so we can explore other areas to partner so we can do more.

On their salaries Senator Kalu assured the association that he would reach out to the relevant stakeholders to ensure that their salaries were paid. In his address Kalu enumerated his achievements in the health sector during his tenure as governor.

In his words ” I awarded a 1 billion naira contract for the construction of the teaching hospital, the contractor partnered with a German company to equip the hospital to a first class standard. We promptly paid workers their salaries because we understood that when workers are duly paid the economy will grow. Unfortunately my successors failed to build on where we stopped. Democracy is redefined by the Government being guided by majority of the people not Government for the people and by the people”.