Results from the ongoing opinion poll organsied by a US-based research agency, Nigeriadecides.com, puts the Labour Party senatorial candidate for Abia South, Chinedu Onyeizu in a comfortable lead, while Governor Okezie Ikpeazu, Senator Enyinnaya Abaribe, and others trail far behind him. 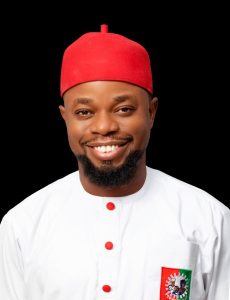 A native of Abayi-Ohanze village in Obingwa Local Government Area of Abia State, the 42 year-old Onyeizu is contesting the senatorial seat with two major forces, the incumbent senator representing the people of Abia South senatorial zone, Enyinnaya Abaribe, who will be serving out his fourth term in the senate by June 2023, and the incumbent Governor of Abia State, Dr. Okezie Ikpeazu of the Peoples Democratic Party (PDP), the ruling party in the state. Abaribe has been in the senate since 2007 under the platform of the PDP until recently when he defected to the All Progressives Grand Alliance (APGA), under which platform he will be contesting for a fifth term to the red chambers. Gov Ikpeazu, on his part, will be completing his second term as Abia Governor, after which he plans to replace Abaribe at the red chambers of the National Assembly, the Senate.

Interestingly, the mood of the country today favours young candidates, particularly those on the platform of the LP, as Nigerians seem to be saying collectively that they are tired of the ruling All Progressives Congress (APC) and the main opposition PDP. Many factors seem to be working for Onyeizu, who appears to have won the hearts of many in his senatorial zone, as the ongoing opinion poll has just demonstrated.

Nigeriadecides.com, is an independent research think-tank based in the United States of America, with a special interest in democratic governance, human rights and citizens participation in electoral process. The online poll currently taking place in Abia South senatorial zone is one of the series of polls that the agency has lined up in various parts of Nigeria ahead of the 2023 general elections, to determine and predict the possible direction and outcome of the elections in Nigeria.

The poll for the Abia South senatorial zone is featuring about 12 candidates from various political parties with Onyeizu already garnering 645 votes to lead others as at morning of Wednesday December 14. His closest rival is senator Abaribe of APGA with 493 votes, while the incumbent Gov Ikpeazu of the PDP is trailing behind the duo with 370 votes. Others include Nwankwo Ezenwa Alaoma of the YPP (316 votes), Nwagba Blessing Okwuchi of the APC (86 votes), Kanu Signor Ndubueze Chukwuemeka of the APP (82 votes), Nwankwo Godswill Chinyere of the AAC (26 votes) and Ulu Joseph of the NRM with 2 votes. Others are Ihezie Obinna Desmond of the NNPP with 2 votes, Wokoleme Ikechukwu David Ajuzie of the ADP (2 votes), Edede Okey of the ADC (2 votes) and Uzoigwe Kenneth of the SDP with only one vote.

From the results so far, it is very clear that indeed, Daniel will soon come to judgment in Onyeizu, when he sits at the red chambers of the National Assembly to represent the good people of Abia South from June 2023.

Since he entered the race, his opponents who are undoubtedly experienced have been jittery over his general acceptability and growing popularity among the people, especially the youths. This is obvious as the political tidal wave appears to be in favour of young, fresh and intellectually sound Nigerians, which Onyeizu aptly fits into. He is not only basking in the euphoria of the youths’ support, he also parades intimidating credentials that unsettle his opponents. And this opinion poll has just validated his acceptability by the people as well as the earnest wish and demand of his people that they need him to represent them at the senate and give them purposeful and quality representation at that level.