Passing through Ikot-Ekpene road-one of the arteries into the commercial city of Aba is a difficult task on a working day particularly in the morning rush hour. Ikot-Ekpene road links Abia State with the neighbouring Akwa Ibom state in the South-South geo-political zone of the country. The gridlock on this ever-busy road is not mainly caused by heavy vehicular traffic. Another contributory factor is the two abattoirs on both sides of the dual carriage way adjacent to the Aba River popularly known as Waterside. The Aba River is the natural boundary between Aba main town and Ogbor hill. 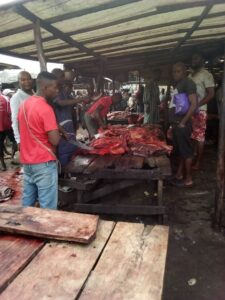 Every day including weekends, cows that have been sentenced to death by the butchers cause traffic jam as they unleash their anger on innocent motorists and pedestrians. In some cases, the cattle collide with vehicles causing road accident that result in unnecessary loss of lives. Before now, there is hardly any week that passes without recording road accident on Ikot-Ekpene road within the East Street junction. Perhaps, the availability of abundant fresh water from the Aba River was a crucial factor that influenced the citing of both public slaughter houses there many decades ago. 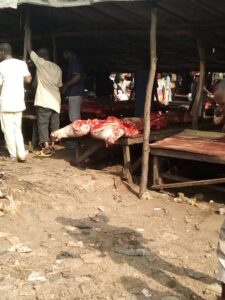 The then Sam Mbakwe administration of the old Imo state might have taken this factor into account when it built the Enyimba Hotel close to the same river. In developed economies with a flourishing tourist sector, the area within the river is a sight tourists will pay to view. 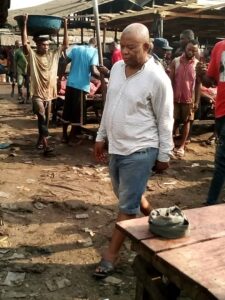 The abattoirs which are older than the state have remained at the same position many decades after. There are other activities taken place within the waterside area apart from the abattoir. There are piggeries and young men who earn a living by roasting hides and skin popularly known as “Kanda” carry out their businesses in the same area. Though Nigeria is not among the heavy polluters of the environment, but these young men ensure that the country contributes to global warming by billowing tonnes of smoke into the atmosphere daily. All these activities which have been going on for years have completely destroyed the aesthetics of the environment as the place looks like a shanty town. Almost 30 years after the creation of Abia State, no administration-whether military or civilian considered it necessary to sanitize the area by relocating the abattoirs to another area probably on the outskirts of the town.

Having worked as the Deputy General Manager of the Abia State Environmental Protection Agency ( ASEPA) before being elected as Governor in 2015, Dr. Okezie Ikpeazu is fully aware of the damage both abattoirs and the piggeries have done to the area around the river. In what may be regarded as the administration’s tough stance on insanity condition, Governor Ikpeazu few months ago inaugurated a committee saddled with the task of relocating both facilities. The five- man committee is headed by the former Commissioner for Trade and Investment, Cosmos Ndukwe. After their inauguration, members of the committee swung into action as work has commenced on the new location.

The Chairman, Abia State Amalgamated Butchers Association, Emeka Oko popularly known as Torty, thanked Governor Ikpeazu for fulfilling his promise. “I want to assure that butchers will move to the new area when it’s completed” he said. On their part, he assured the Governor of their support and cooperation promising not to sabotage any effort of government.

One of the attributes of a good leader is the ability to take decisions for the benefit of the larger members of society. Dr. Ikpeazu has demonstrated his commitment to have a clean break with the past by relocating both abattoirs almost 30 years after the creation of Abia State.