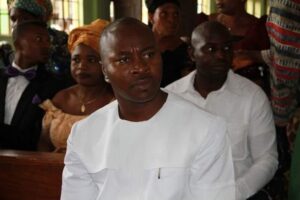 This morning, Paul Ikonne, Executive Secretary of NALDA, a Federal Agency in Nigeria, has distanced himself from Mascot Uzor’s nomination as a candidate of APC in Aba Federal constituency election coming up this weekend in Aba North and South.

Paul Ikonne on a live Magic fm radio explained that his party (APC ) doesn’t have candidate in Aba North & South Federal constituency because there was no proper primary election conducted anywhere. He said that people were not even allowed to purchase forms and that cannot be condoned in the APC he belongs..

According to him, Aba doesn’t belong to one family.
It should be Abacracy not Mama or brothercracy

He went further ‘The days of Okija shrine is gone
No one can take us back to Okija Shrine
You can’t make mess of Aba and come back to laugh at us. OUK joined us and before he joined us, APC was going smoothly. As a founding member of APC in Abia State, we will not allow him to kill APC the way he killed PPA’.

The APC Chieftain asked those supporting Sen. Orji who imposed his last brother on APC to Show Abians one thing OUK has as a legacy in Aba. If he believes in Aba, he should’ve supported another person not his brother and not even when his younger brother has gone there before with no single legacy anywhere in Aba..

We can’t allow OUK to bring the head of indigenes and non indigenes together in Aba. We live and grow together and we have been doing that but OUK is all for his family and family, not even for his community nor Abia north..