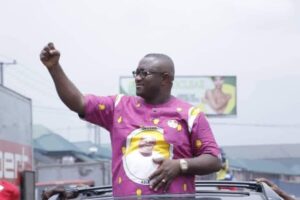 The coast seems to be getting clearer for a landslide victory for PDP’s Chimaobi Ebisike at the March 27 Aba North/Aba South Federal Constituency bye-election.

This follows the decision of the candidates of the All Progressives Grand Alliance (APGA), Destiny Akaraka Nwagwu, and that of Action Alliance, Okey Prestige, to step down for the Peoples Democratic Party candidate, Chimaobi Ebisike, calling on their respective supporters to support the PDP candidate.

Speaking while announcing his decision to step down, Destiny Akaraka said, “I have decided to step down for Ebisike because I think it is the right thing to do given how well the Governor who is the leader of the PDP in Abia State has performed.

We can only support such a progressive Governor and his party because they have demonstrated sufficient goodwill and dedication to the welfare of the people. It is my belief that if I continue with my ambition, it will give the party that has been promoting anti-Igbo policies including the RUGA policy which our people have loudly rejected, a chance”, he said.

On his part, Okey Prestige of Action Alliance (AA) said, “After sufficient consultation with my people, I hereby withdraw from the Aba North/Aba South Federal Constituency bye-election holding tomorrow.

“I hereby urge all my supporters to support the candidate of the Peoples Democratic Party, Chima Ebisike, because PDP has demonstrated that they have the interest of Abians and Ndigbo at heart compared to the RUGA party.

“I hereby urge all my supporters to go with the PDP”, he concluded.