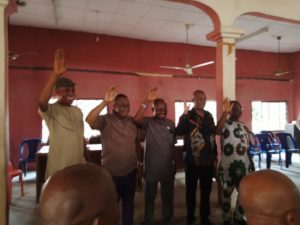 The former Speaker of the Abia State House of Assembly Rt. Hon. Chikwendu Kalu, the PDP State Organizing Secretary, St. Moses Ogbonna, the State Ex-Officio member, Chief Chijioke Akanwa, the T. C. Chairman Chief Nkem Onwubuiko and all principal leaders of the party from the 4 blocks of the local government escaped death by the whiskers as thugs numbering more than 100 led by the party LGA Chairman Mr. Christopher Chijioke invaded the local council chairman’s office after after the party LGA Congress had been concluded. The party leaders had retired to the office of the T. C. Chairman for refreshment when the cult members arrived in company of Mr MT Orji, Chief Edwin Ihejirika and others suspected to have been sent by Mr. Darlington Nokocha, Member misrepresenting Isiala Ngwa North/South Federal Constituency and they surrounded the office. They broke into the conference room and destroyed all the seats and tables including the Siena bus of the State Organizing Secretary St. Moses Ogbonna. It was when they were hitting the doors to the main office of the TC Chairman to gain entry that men of the Nigeria army and police arrived to save the helpless party chieftains. 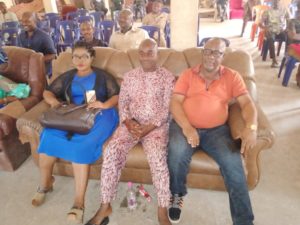 Recall that the party at the National had rescheduled the LGA Congress from 28/3/20 to Saturday 21/3/20 and as a result the state chairman and the chairman of the state congress committee therefore directed all party LGA chairmen to convene emergency party caucuses at the various party office and or local government councils to harmonize the congress lists. The State Chairman in that meeting attended by all the LG party chairmen, members of the state congress committee and swc including the Isiala Ngwa South LGA Chairman Mr Chijioke and the State Organizing Secretary St. Moses Ogbonna. The state chairman further warmed the LGA chairmen that on no account will any meeting concerning the congress be convened in any private house and that no party leader from one block or ward should be allowed to nominate person from another ward. Following the announcement for the rescheduled congress, the caucus was convened at the local government council and all the caucus members were in attendance including the former speaker and Member representing Isiala Ngwa South State Constituency in the Abia State House Of Assembly, Rt. Hon. Chikwendu Kalu, The T. C. Chairman Chief Nkem Onwubuiko, the State Organizing Secretary, St. Moses Ogbonna, State Ex Officio member Chief Chijioke Akanwa, Chief Sir Erendu, Bar R N Nji, chief TCA Ugorji, the LGA Deputy Chairman Ikenyi, Chief Chinagorm Nwamkpa, Dr Reginald Alozie, and all former commissioners, former party office holders who are constitutional members of the LGA Caucus. The caucus set up LGA Congress committee of 5 members, one each from the 4 blocks of Isiala Ngwa South who were nominated by the members of their block and the chairman appointed by the TC Chairman. All the blocks went went out to select their member. The following persons were nominated as LGA Congress Committee -: Mbutu block – Nze B. O. Ahuruonye, OVOV :- Dr Ronald Alozie, AMOBI :- Chief Akanwa Chijioke and Nvosi block St. Moses Ogbonna while Chief Damian Ozurumba was nominated by the TC Chairman as Chairman. The committee members were inaugurated and given terms of reference mainly to produce working formula for a free and equitable Congress. The committee went into action and later came out with zoning formula. All positions were swapped following the system at the state. Positions formerly held by Mbutu block was swapped to AMOBI including the position of LG Chairman and verse vasa. The positions held by Nvosi was swapped to OVOV and verse vasa. The committee considered the position of National Delegate and reasoned that the position had been held by Nvosi block for several years and should move to Mbutu block while the present state organizing secretary is from Nvosi, therefore the position of state youth leader be moved to OVOV. The recommendations of the LG Congress committee was accepted and adopted as working formula. All the positions were therefore listed out and swapped while the leaders from the blocks went out and harmonized their lists according to the directives of the state congress committee Chairman and the list was adopted and signed by all caucus members present.
It is therefore unfortunate that at this level of our development certain people who has the grace to occupy government and or elective offices arrogate themselves to the positions of alfa and will want to join omega on top. We say NO and mean it. If the State Governor did not stay in his house to foist list on the party, no other person, no matter how highly placed should be allowed to do so. Those who have occupied the representation of the youths for the past 16 years and have all these years controlled the constituency projects meant to empower the youths will be ready to account for every bit of it. If all they can achieve is to militarize the youths who should be angry with them for setting them to the path of penury, someday someone will jerk the youths awake to their realization that the common wealth held by one man is the reason for his joblessness and sufferings and they should rise in unity not to destroy properties or kill unesessarily but to demand for what belong to them. It will soon happen. Lastly the party’s constitution is sacrosanct and must be respected by all the members. The list of Isiala Ngwa South has been harmonized by a constitutionally constituted party caucus and at the official place and the list has been submitted to the party’s State Congress Committee by the LGA Congress committee, any person who feels that he has grown larger than the party should think twice as the party is supreme and must be made to submit to party’s directives. St. Moses Ogbonna. State Organizing Secretary PDP
Above are clips of the LGA Caucus meeting in secession showing members of the congress committee being inaugurated by Bar RN Nji