Herdsmen flees leaving over 100 cows behind 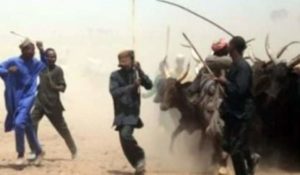 This was as a result of the constant vandalization of crops in the farmland by the herdsmen and their cows.

According to reports, ” the farmers discovered that their farmlands has been invaded and their farm produce destroyed. They however joined hands with the hunters in the community to pursue the Fulani herdsmen. The herdsmen who in turn realised the change of tune in music and took to their heels leaving their cows behind were over 100 I number.

The cows that were left behind by the herdsmen were arrested and brought to the palace of the traditional ruler.”

It is obvious that the farmers are tired of the mood of operation of the herdsmen and has given stern warning to them saying that they are no more wanted in their community.

One of the farmers, Mr Sunday Fakasin was a victim of the invasion. Mr Sunday recounted how his farmland of yam and other item he planted worth thousands of naira was destroyed. He however said that they are not in enemity with the herdsmen but they are no more needed in Ijare community any longer.

It can be recounted that months ago, over 30 cows was killed by mysterious thunder in the same community.

However, the Police Public Relations Officer, Mr Femi Joseph has confirmed the information disclosing that one of the herdsmen, Mr Banbuga Abu was arrested during their investigation and assured that more investigation is still ongoing.