A 53-year-old Brazilian returnee, Okolie Nwabueze, has been arrested at the Nnamdi Azikiwe International Airport (NAIA) Abuja by operatives of the National Drug Law Enforcement Agency (NDLEA) for allegedly importing 92 wraps of cocaine. 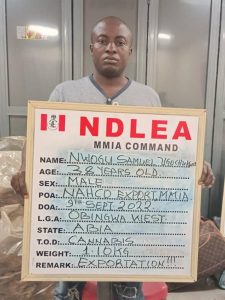 This is even as Nwabueze, a father of two, ingested the drugs and eventually excreted them after days under observation in the Agency’s facility. 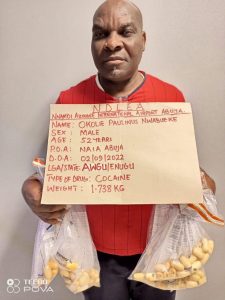 This is contained in a statement by the Director, Media and Advocacy, NDLEA, Mr Femi Babafemi on Sunday in Abuja.

Babafemi said that the suspect who hailed from Mmaku village, Awgu Local Government Area of Enugu State, was arrested on Sept. 2.

The arrest was upon his arrival on Qatar Airline flight enroute Brazil-Doha-Abuja.

The NDLEA spokesperson said that the suspect claimed to have left Nigeria to Mozambique in 2004 and finally relocated to Brazil in 2017.

This, he added, was where he obtained a residence permit before deciding to import the illicit substance for a $4,000 fee.

Babafemi said that the suspect was caught for attempting to export a consignment of new psychoactive substance, “Akuskura”, to Saudi Arabia.

He said that the suspect, an indigene of Kware LGA Sokoto, who lived in Goron Dutse area of Kano, was arrested on Sept. 5.

He said arrested during the outward clearance of passengers on Ethiopian Airline flight to Riyadh.

In another development, at the Murtala Muhammed International Airport (MMIA) Ikeja Lagos, no fewer than 1.099 million tablets of Tramadol (225mg) have been seized.

Babafemi said the drugs were intercepted through inter-agency collaboration between NDLEA and the Nigerian Customs.

“The pharmaceutical opioids packed in 50 cartons weighing 2,058.90kg, were imported from Pakistan via Addis-Ababa on Ethiopian Airways.

“The consignment was concealed among other non-controlled pharmaceuticals.

“Also, a freight agent, Aliyu Abubakar, was on Friday arrested at the Nigerian Aviation Handling Company Plc (NAHCO) export shed of the airport.

“The arrest was over an attempt to export a consignment of cannabis concealed inside bottles of Caro white body lotion,” he said.