A man nicknamed Ato la gate in the early hours of today was electrocuted when attempted to steal electric cables in a private residence in Amaorji Village Obingwa LGA. 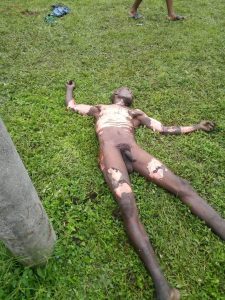 Newsmirrorng authoritatively reported there has been an upsurge in stealing of Electrical facilities in recent times.

According to a Facebook user, luck run out of the victim because while he was trying to carryout his notorious action, light was restored back