The arrested Native Doctor implicated in the killing of the Anambra lawmaker, Okey Okoye has been making confessional statements naming over 16 members of his killer gang. 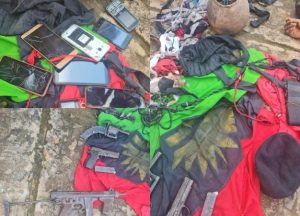 The Native Doctor also named major hideouts and camps where kidnap victims are being kept and at the moment more reinforcements of officers and men of the Joint Task Force (JTF) on security JTF have arrived Anambra and has commenced operations.

This is coming as the Police Command rescued four kidnapped victims from the den of bandits which led to the killing of a kingpin popularly known as ‘Sampolo’ during exchange of gun fire.

According to the Anambra Police Public Relations Officer, DSP Tochukwu Ikenga: “Based on intelligence gathered which indicated the location of a kidnapped victim at Neni in Anaocha Local Government Area, the police operatives working with the vigilante stormed the location on Sunday 5th, June rescued the victims and arrested one Emeka who was suspected of complicity in the crime.

Upon interrogation he confessed to the crime detectives to the hide out of the gang in Oba town in Idemili South Local Government Area where detectives engaged the gangsters in a shoot out,” he said.