How and why Atiku floored Wike, Saraki, others to clinch PDP 2023 presidential ticket

Former vice president, Atiku Abubakar, Saturday night, May 28, 2022, beat 12 other challengers to emerge as the candidate of the opposition People’s Democratic Party for the 2023 presidential election. 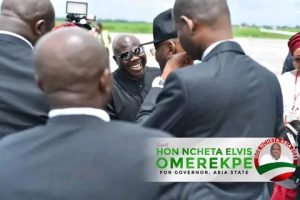 Emerging facts indicate that northern elders were behind Atiku’s victory.

Atiku won the primary by 371 votes to defeat his closest challenger, Governor Nyesom Wike of Rivers State, who poled 237 votes, while a former President of the Senate, Bukola Saraki, scored 70 votes. 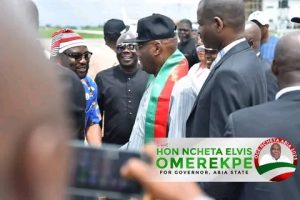 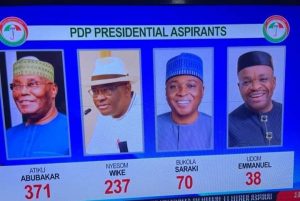 The northern elders’ intervention was said to have led to the withdrawal of the Governor of Sokoto State, Aminu Tambuwal, and a former Managing Director of FSB International Bank, Mohammed Hayatu-Deen, from the race. 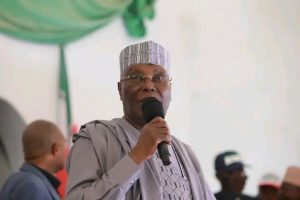 The leaders met with the aspirants from the northern part of the country on Friday night.

Led by a former National Security Adviser, Gen Aliyu Gusau (retd.), and a former governor of Sokoto State, Attahiru Bafarawa, the leaders went into the crucial meeting to try and reduce the number of northern aspirants to one.

It was learnt that the northern leaders insisted that a particular candidate from the southern part of the country should not be allowed to win the election.

A source privy to the meeting told one of our correspondents that the aspirants from the North were asked to step down for Atiku, who they considered as having national spread more than the others.

It was gathered that Gusau, who was also in Port Harcourt, Rivers State four years ago when Atiku was elected as the party’s presidential candidate, told the aspirants that he was speaking the minds of the entire northern leaders.

The source, who is also a former national chairman of the PDP, said, “The northern leaders felt that Atiku would be better in managing the country and that there is nothing the ruling party or the Federal Government would say about him that had not been said.

“They were of the opinion that no anti-corruption agency will harass him anymore and that he also has national spread.”

It was also gathered that Hayatu-Deen agreed to step down after the meeting, but Tambuwal and others said they would consider it.

“Tambuwal said he would speak at the convention ground, while others said they would speak to their delegates on what to do,” the source added.

Immediately after Tambuwal announced his withdrawal, Atiku took to his Twitter handle to hail the decision.

He also said he was looking forward to working with the former Speaker of the House of Representatives.

Atiku tweeted: “Thank you, H.E @AWTambuwal, for your spirited campaign. I look forward to working with you as we unite our party and our country.”

The announcement was said to have come as a shock to Wike, who was a solid supporter of Tambuwal when the latter vied for the same ticket in 2019. The outcome of the 2019 national convention which was hosted in Port Harcourt, was said to have irked the governor, who allegedly felt that a former National Chairman of the party, Prince Uche Secondus, ought to have helped swayed in favour of his friend, Tambuwal.

The unresolved crisis between Wike and Secondus as a result of the 2019 convention was said to have resulted in the removal of the former national chairman of the party, which was engineered by the governor.

A source close to the party’s top hierarchy said, “It is better we have someone like Atiku.

“He is calm and has listening ears. He is experienced and has his supporters everywhere in the country. That’s why we gave him the ticket.”

In his acceptance speech after he was pronounced as the PDP candidate by the Chairman of the Convention Planning Committee, Senator David Mark, Atiku extended a hand of fellowship to the defeated aspirants and pledged to work with them to ensure victory for the party.

He described the primary as one of the freest elections to be conducted by the party, saying, “Today marks another milestone in the process to consolidate our democratic gains.”

Atiku said if elected President, he would unify the country, deal with insecurity and revamp the economy.

He accused the All Progressives Congress government of polarising the country, stating, “I pledge to unify the country that is why I refer to myself as a unifier. Unity is very important because the government of the APC has disunited Nigerians completely.”