The Police at Ikorodu, Lagos State have arrested 38-year-old Uwenzi John, for allegedly molesting his 14-year-old sister in-law , sexually, in his Ikorodu apartment. 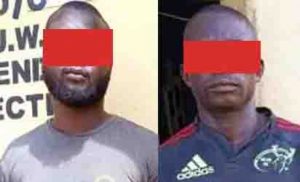 The arrest of the father of three from Ebonyi State, followed a complaint lodged by his wife, Happiness , that her husband had been sleeping with her sister since November last year and February 2022.

It was gathered that the bubble burst after the teenager who claimed she could no longer stand the sexual molestation from the mechanical technician, confided in her sister.

Spokesman for the Lagos State Police Command, SP Benjamin Hundeyin confirmed both arrests. He said investigation was still ongoing, adding that the cases had been transferred to the Gender Officer at the Command headquarters for further investigation.