Following the recent receipt of a certified true copy of the order to forfeit $460,000 imposed by United States court on the account linked to the presidential candidate of the All Progressives Congress (APC), the Peoples Democratic Party (PDP) has hinted that it may approach the court to determine if his participation in the 2023 poll will not violate the Constitution and Electoral Act. 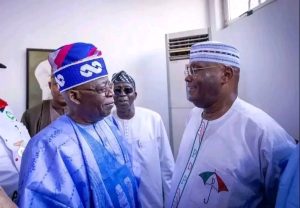 The National Publicity Secretary of the main opposition party, Debo Ologunagba, who addressed a press conference on the issue in Abuja on Sunday, disclosed that the party is keeping its options open.

The party spokesman, who was fielding questions, on the attempt by the Independent National Electoral Commission (INEC) to distance itself from the case that emanated from a court in Chicago, Illinois, had been asked whether it will head to court should the electoral body fail to act.

He said: “We are very hopeful. What we decide to do as a party, we don’t consult you, we don’t tell you. When we started the case against Osun, we didn’t tell you, right? So, we will look at the issue and take decisions and actions based on the exigencies of the times, the requirement and the need to protect our constitution and our electoral process. So, you leave that us.”

Speaking specifically on a possible court challenge, Ologunagba, stated: “Every option is on the table. And so, I will leave it like that.”

He debunked insinuation that a court in the United States is not of competent jurisdiction, explaining that countries are encouraged to domesticate international conventions which Nigeria is signatory, and such has led to local laws including the one money laundering.

“Second, trafficking in narcotic is one of such. That’s why we have the NDLEA and other agencies of government to enforce that because they have been domesticated, they are international conventions.

“Those crimes are described as international crimes to which every member state of the United Nations is a signatory and they are obligated to be like.

“We will study it and any appropriate action that needs to be taken, it will be taken. Like I said to you, every option is on the table,” he declared as he read from the proceedings of the court suggesting an indictment,” he said.

Reading from a prepared text earlier, the PDP spokesman, said: “It is no longer news that the Presidential Candidate of the APC, Asiwaju Bola Ahmed Tinubu is irredeemably and hopelessly ineligible to contest the February 2023 Presidential election having been reportedly indicted and subjected to criminal forfeiture judgment for a narcotic related offence by a United States Court in Northern Illinois.

“Nigerians are however appalled by the lame attempt by the APC Presidential Campaign which, after admitting that there was a $460,000 drug money criminal forfeiture judgment against accounts traced to the APC Presidential Candidate, is now desperately trying to pull a wool over the eyes of the Nigerians people and our democracy institutions.

“Seeing that it is technically out of the Presidential contest and further distraught because it cannot also field candidates at all levels in the 2023 general elections due to its illegal and unconstitutional congresses, the APC has resorted to unleashing hoodlums to attack PDP Presidential Campaign rallies and other innocent Nigerians going about their legitimate endeavors as witnessed in Kaduna and Borno States, in a bid to trigger crisis and scuttle the elections.

“There are already apprehensions in the public space of unrefuted allegations that the APC is behind the orchestrated attacks on the Independent National Electoral Commission (INEC) offices in Ogun and Osun States.

“The plan of the APC is to instill fear in the citizenry, disorganize and weaken other political parties, frighten, hamstring and immobilize INEC from conducting the 2023 general elections.

“The APC must note that its schemes, denials, threats and resort to violence cannot help Asiwaju Tinubu. By the provision of Section 137 (1) (d) of the Constitution of the Federal Republic of Nigeria 1999 (as amended) Asiwaju Tinubu is not eligible to contest the Presidential election in Nigeria.

“Section 137 (1) (d) of the 1999 Constitution (as amended) provides that:(1) A person shall not be qualified for election to the office of President if: (d) He is under a sentence of death imposed by any competent court of law or tribunal in Nigeria or a sentence of imprisonment or fine for any offence involving dishonesty or fraud (by whatever name called) or for any other offence, imposed on him by ANY COURT or tribunal or substituted by a competent authority for any other sentence imposed on him by such a court or tribunal.

“For clarity, forfeiture is means ‘something to which the right is lost as for commission of a crime or misdeed, neglect of duty, or violation of a contract.’ It is instructive to note that trafficking in narcotic is an international crime to which all nations are obliged and mandated to apprehend, prosecute and enforce any judgment or Court Order imposed on offender. Nigeria being a signatory to international convention on trafficking in narcotic is obliged to enforce any Order or judgment imposed on any offender by a competent court anywhere in the world.