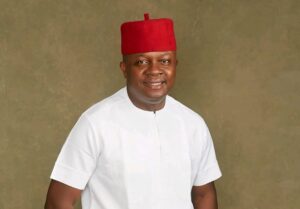 There have been several conjectures as to why the PDP failed to clinch the Anambra governorship seat. However, pundits say the major factor that turned the tide against the major opposition party, was the controversy that trailed the outcome of its June 26 primary. Not a few believe that the PDP actually lost the November 6 contest on June 26, when it nominated its candidate.

Preparatory to the primary, the party had cleared a total of 16 aspirants to participate in the exercise.

Everything was going well for the PDP, or so it seemed, until few days to the primary, when the party ran into troubled waters.

First, a group of party members in the state got a court order sacking the entire PDP leadership of the state. The court order also nullified the election of the ad-hoc delegates, who were to participate in the primary to elect the PDP candidate for November 6 contest. From thence, it became a litany of controversies for the opposition.

However, as a fall back option, the PDP leadership resorted to the use of “super delegates” for the nomination of the party’s gubernatorial standard bearer for the Anambra contest.

According to a statement by the National Publicity Secretary, Kola Ologbondiyan, on the eve of the primary, a total of 212 super delegates, who are otherwise automatic delegates would choose the party’s candidate.

Surprisingly, on the day of the primary, the number of the super delegates kept changing almost every hour, to the consternation of most of the aspirants.

Eventually, a total of 218 super delegates were accredited to participate in the governorship primary, against 212 originally announced. At the end of the exercise, Ozigbo polled 62 votes to clinch the PDP. Obiorah Okonkwo, who came second scored 58. However, about 17 votes were unaccounted for.

Expectedly, Okonkwo rejected the outcome of the primary, noting that it was fraught with alleged irregularities.

According to him, “perhaps, the most blatant of the irregularities came in the collation of votes. For instance, a total of 218 delegates were accredited for the exercise. The tally of votes cast for the candidates, along with voided votes came to 201.

“A full week after the primary election, nobody has satisfactorily explained what happened to the other 17 votes cast by duly accredited delegates.

“We expect those who conducted the election to provide the answer to this obvious discrepancy, particularly given the razor-thin margin of victory of the declared result.”

Curiously, the PDP national secretariat failed to address concerns over disparity between the number of accredited voters and the votes declared.

Exasperated by the development, Okonkwo defected to the Zenith Labour Party (ZLP) and picked the party’s ticket for the November 6 poll. Similarly, Maduka moved to the Accord Party, on whose platform, he eventually contested the governorship seat. Other aggrieved members of the party also defected to the APC.

Thus, for the PDP candidate, apart from the depleting ranks of the opposition party in Anambra, he was also faced with litigation over who is the authentic candidate of the party.

Recall that a faction of the PDP had at a parallel primary chosen Senator Ugochukwu Uba as its governorship candidate. However, few days to the November 6 contest, the Supreme Court affirmed Ozigbo as candidate of the PDP.

Nevertheless, analysts say the inability of the PDP leadership to effectively manage the differences that arose from the gubernatorial primary was the opposition party’s greatest undoing in the just concluded Anambra governorship poll.