Dear Adorers, there is a particular audio flying around where Fr. Mbaka was heard saying that the Heavenly Hosts had rejected Prof. Charles Chukwuma Soludo in an election. 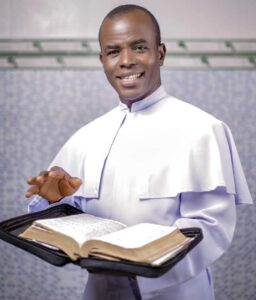 When I inquired further about this audio, I was meant to know that it was released in 2013 election when Soludo was up against Willie Obiano who was Peter Obi’s candidate. That actually means that Fr. Mbaka’s prophecy came true in that particular election.
But in this year’s election, Fr. Mbaka never chose any particular candidate to win.

Dear friends please be very careful of how you open your mouth wide to condemn what you don’t understand. In the area of criticism, one has to be sure of what is being criticized so as to know what exactly to say and not to say.

People are condemning Fr. Mbaka on that particular audio, asking him whether “Ndi Eluigwe” as he mentioned in that audio can actually change.

And I tell you today that NDỊ ELUIGWE (The Heavenly Hosts) can change their stand anytime any day.
If you don’t understand the things of God and the spirit, you need to be quiet and run away from self inflicted curses.

In Isaiah 38:1-5 and 2Kings 20:1-6, King Hezekiah became very sick and the prophet Isaiah brought God’s prophecy to the King telling him that according to the words of God, He should put his house in order because HE WILL DIE from his current sickness and there will be NO RECOVERY.
When the prophet Isaiah left the King, the King faced the wall and prayed to God to remember how he did his best to keep his commandments and rule his people in the fear of Him.

God sent the prophet Isaiah back to King Hezekiah to tell him that his prayers has been heard and 15yrs more has been added to his life.
This is the Heavenly host (Ndị Eluigwe) changing a decision that was already made.

When we pray to God, we want God to actually give us all we ask for and at the time we ask for it.
Ndị Eluigwe might have rejected Soludo’s ambition and prayer in 2013 because he wasn’t ready for it then and he may have become a terrible Governor if he had been granted his wish at that particular election.
But if he eventually becomes the Governor, then know it that God has seen him as mature enough to carry the weight of the office.

A little boy of 5yrs can ask God for a power bike because he has seen and loved it. But God cannot answer such a prayer not because the little boy was joking when he prayed, No but because if he was granted that wish the little boy might attract Armed Robbers or be involved in an accident.
Ndị Eluigwe will say No to that boy at that time and may later provide his wish when he is old and responsible enough.

God can reject you and your prayers now because He knows it is NOT YET your time to take it up.
When it is your time, Ndị Eluigwe will smile at you.

God’s ways are not our ways, SO RELAX and stop the Unimaginable Criticisms.