Aba was a city synonymous with Its bad roads before Gov. Ikpeazu took charge and changed the narratives of that commercial nerve center. 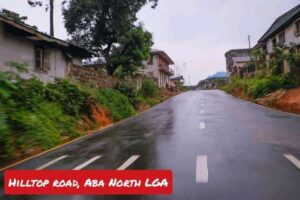 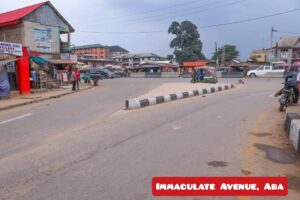 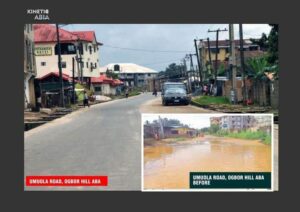 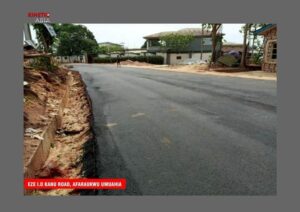 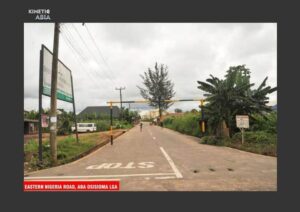 From the dual carriage way to the inner streets, it is a story of near total neglect and great abandonment as the level of decay was unprecedented and in the full glare of and and sundry.

All sizes of potholes and eroding portions painted part of the ugly story then that residents as well as visitors were left with just one question on their lips, as to when the frustration felt by citizens over the poor network of roads in this all important cosmopolitan city, will likely end.

State-owned roads were just as horrible as the stretches of roads controlled by the federal government. It was a tale of promises delayed or unfulfilled and sometimes, forgotten outrightly.

Everyday, Aba residents groan under those bad roads. Anybody who is just coming to the city for the first time would think that it just came out from a civil war. But this is not the case.

For many, it is simply a case of bad governance or poor leadership or both. It does not matter how big and expensive your car or vehicle is, it can’t stand the daily challenge on these deplorable roads that bedeck the entire city.

Aba Residents spent more on the repairs of their vehicles due to the effect of the bad roads. And because of the state of roads in the city, people now preferred driving Sports Utility Vehicles (SUVs), which are not even exempted from constant break down.

Some times, petrol tankers and container trucks have fallen at bad portions of the roads with it’s resultant gridlock, thereby causing hard times to people and a couple of residents who spoke to Newsmen then, had lamented that many roads had worsened in the city despite the high internal revenue generated by the government

Added to the bad roads is the embarrassing flood seen on a daily basis each time it rains, making movement difficult for motorists. This is usually due to the blockage of channels that make easy flow of water possible.

Above all this, businesses in the city was seriously hit below the belt by the poor condition of roads even as some business owners who couldn’t take it again left Aba.

From time to time, people have questioned the whereabouts of the state government. The last time Aba Residents could remember that they enjoyed a semblance of good roads was when the late Sam Mbakwe was in charge of the old Imo state.

Then, many years after. The new administration of Governor Okezie Ikpeazu came on board, which many had thought will be like other past administrations, was now a ray of hope. Though many criticised him too early with “Thought they said Nwaba ga Aru Aba”.

The good news is that today, the story has changed many residents of Aba have continued to express delight with the zeal and efforts of the Ikpeazu’s led government to have made the major roads of Aba metropolis to wear a new look.

His first 100 days in Office, while some state governors was being distracted by courtesy visits and attending events, Governor Ikpeazu had one or two projects to showcase. He focused on how to tackle the multifaceted challenges confronting Aba and other parts of the state.

His administration has constructed 160 roads across the state since inauguration in 2015. Over 50 out of the 160 roads constructed are located in Aba including the road mentioned above, while about 105 construction sites are currently active in the state.

His government has maintained the services of reputable road construction companies to ensure quality and high standard of the roads, as the roads constructed by his administration will have at least, 30 years span.

The state in general under Ikpeazu’s leadership has witnessed greater development in all sectors and all Ndi Abia need now is to be patient with the governor to deliver his remaining mandate.

I am very confident that the governor will not fail Abians. He has been doing well. Don’t forget that he met the problems facing Abians on ground when he took the mantle of leadership. I am very sure that he will tackle them.