There is panic in Oraifite, Ekwusigo, Anambra State, following a reported siege on the country home of Barr Ifeanyi Ejiofor, attorney for the Indigenous People of Biafra (IPOB) and its leader, Mazi Nnamdi Kanu. 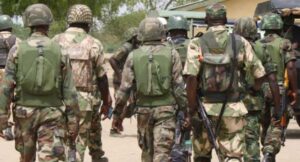 News of the siege was broken in the wee hours of Sunday via a statement by the International Society for Civil Liberties and Rule of Law (Interscoiety), saying that it “has received distress calls from lawyers working in the Law Firm of Barr Ifeanyi Ejiofor (I.C. Ejiofor and Co), Abuja, informing us that the combined team of armed soldiers, SSS and Police have surrounded the Oraifite nuclear and extended Family Houses of Barr ‘Onowu’ Ifeanyi Ejiofor and his siblings; and condoned off the entire exits and entries and placed the whole area under siege.” 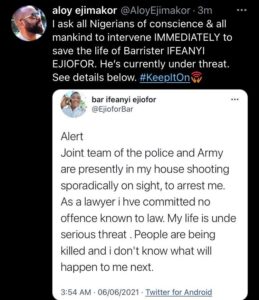 “We also managed to reach Barr Ifeanyi Ejiofor on phone and he confirmed the attack, saying that “soldiers, joined by Police and SSS operatives are shooting in different directions and are about breaking into his main compound”. He also said that “he heard the distress voices of his village neighbors panicking and crying, indicating that they must have been abducted and they are likely to include early morning neighborhood sales attendants and those returning from church vigils, etc”. The activist Lawyer also suspected that some members of his family including security and domestic aides might have been abducted and that he had returned home for weekend yesterday evening and only informed the Oraifite Area Commander (ACP Afolabi) and few others that he was around.

“It must be recalled that Barr Ifeanyi Ejiofor, his siblings and their family houses in Oraifite, Ekwusigo, Anambra State were ferociously attacked on 2nd Dec 2019. His heavily pregnant wife narrowly escaped having miscarriage and later delivered miraculously. The attacks had taken place on the said 2nd Dec 2019 immediately after the family’s outing church service held for his late brother, a priest of the Anglican Church. Barr Ejiofor also narrowly escaped being killed by soldiers and police. In the end, five persons including his domestic aides were shot and killed and scores of others injured. The irate youths of the Community protested angrily near the Community’s Market Square leading to loss of two principal police officers. The Nigerian Government swiftly deployed troops and burnt down 22 properties including a dozen family houses and ten sales stores. Following the ferocious attacks, Barr Ifeanyi Ejiofor, went underground for months and shut down his law offices in Abuja, Nnewi, etc.”

The crude method by Government of Nigeria including invasion of citizens’ homes at ungodly hours especially the dwelling homes of respected and legally recognizable persons and brazen violation of their rights to privacy and family is universally unheard of, despicable and condemnable. Barr Ifeanyi Ejiofor as a respected member of the Nigerian Bar Association and licensed legal practitioner is above board and beyond being treated as a duly investigated and indicted common criminal on the run.

“Also under Nigeria’s extant laws, applicable globally, Barr Ifeanyi Ejiofor and other licensed legal practitioners have right and duty to represent and defend any citizen or citizens or national or nationals irrespective of gravity of crime(s) alleged to have been committed. The security forces of Nigeria are hereby called upon to withdraw and discontinue their siege and follow due process. If Barr Ifeanyi Ejiofor is legitimately wanted for any crime, due processes must be followed to the letter. This is more so when he called and informed the chief police officer in the area (ACP Afolabi) of his being around for a weekend rest. Therefore, if anything untoward happened to the Lawyer and his family or properties including his family hose and law offices, the world is being put on notice to hold the Nigerian Government responsible.”