It was indeed a show of shame yesterday, Wednesday, April 29,2020 as a 37-year-old man and father of 3 children,who identified himself as Godstime Okon was caught having an intercourse with a girl of seven years. 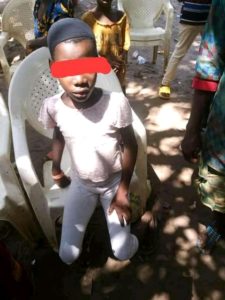 The ugly and abominable incident which took place at Ime-Obi, Agbor was condemned by residents who described Godstime Okon as a devil incarnate. 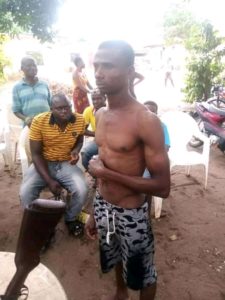 Confessing his evil deed before residents of the area, Okon said that he is an okada rider but lives with his wife and children at Ime-Obi.

He disclosed that his atrocious act with the little girl started a few days ago after he visited the victim’s family house and forced her to massage his penis.

He stated that he has penetrated the little girl twice, the last of which was in the bathroom.Nemesis caught up with him as he was caught in the act.

The victim, a primary 2 pupil said that Okon had penetrated her twice at the end of which he will give her #250.

Meanwhile, the Chairman of the Agbor Gha Ihun security group, Mr Monday Kiyem while interrogating Okon in his Ime-Obi office described him as a rapist and wicked man whose only intension is to commit evil.

He advised parents with little female children to be careful of male visitors who come to their houses, noting that some male visitors do not always come with good intentions.

He promised that Godstime Okon will face the wrath of the law for his abominable act against a minor.

At the time of filling this report, Godstime Okon,has been handed over to the men of Agbor Police for further investigation.