Operatives of the Nigerian Police Force on Monday arraigned two suspects, Bilyaminu Aliyu and Aminu Hukunci, in connection with the lynching of Deborah Samuel, who was accused of blasphemy. 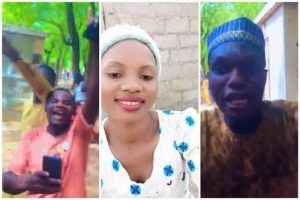 The suspects were docked at a Sokoto Chief Magistrates’ Court for their alleged participation in the crime.

News Agency of Nigeria reports that 34 lawyers were on the defence team. The accused persons also pleaded not guilty to the crime.

Leading a team of 34 lawyers, the defence counsel, Mansur Ibrahim, applied for the bail of the accused persons on liberal terms citing constitutional provisions and sections of the Administration of Criminal Justice Law.

The trial judge reserved the ruling on the bail application and ordered the accused to be remanded at a correctional centre.

Prosecuting inspector, Khalil Musa, told the court that an investigation was in progress.

Last Thursday, a mob of Muslim extremists killed and burnt the young lady over alleged blasphemy.

This attracted the outage of Nigerians with the Christian Association of Nigeria, the Sultanate of Sokoto, among other rights activists, lawyers and groups calling for the arrest and prosecution of the suspected killers of the female student.

The police confirmed the arrest of some of the suspects with a promise to ensure justice was served.

However, some young persons in the state took to the streets to protest against the arrest of the two suspects involved in the killing of Deborah.

Scores of protesters could be seen destroying and looting shops. They also burnt some churches and houses.

Governor Aminu Tambuwal of Sokoto consequently imposed a 24-hour curfew on the state metropolis on Saturday, relaxing the curfew on Monday to be observed from dusk to dawn.