A man identified as Patrick Onoja Igah, has been arrested for allegedly raping a 7-year-old girl inside the 7th wonder church premises in Owukpa area of Benue state over the weekend. 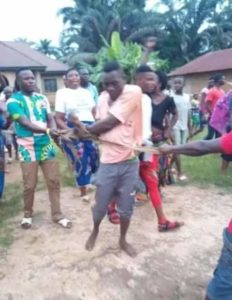 The 26-year-old Mr. Patrick, popularly known as Omolomo, was caught pants down while having carnal knowledge of the underage at the premises of the Church located in Akparoji, Benue State.

Angered by his abominable act, some angry youths pounced on him, tied him and gave him the beating of his life until he passed out.

The spokesperson of the state police command, DSP Anene Sewuese Catherine, while speaking on the issue, said the suspect lured the victim who was out to buy something for her parents, into the church premises where he raped her.

In her words;
”It is true. The girl is 7-years-old. She has been taken to the hospital. The suspect is 26-years old. It happened when the girl went to buy something and the suspect lured her into the 7th Wonder church where he raped her”