There is no doubt that the liabilities of Abia state Polytechnic increased geometrically as the then Governing Council and the Rector with his principal officers, milked the institution dry in contract awards and indiscriminate employment of workers. 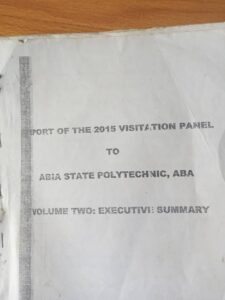 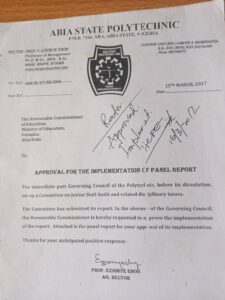 In the manner of recklessness and abuse of office which greeted the Sir Onukaogu era, the Rector appointed one Mrs Ngozi Eme-Anele, an academic staff in the Polytechnic as Acting Director of Physical Planning when she was not a registered architect and the position not backed by law establishing the institution.

Eme-Anele who was employed on 3rd September, 2007, as Lecturer 1, was on the same month, appointed Acting Head of Department of Architecture. On February 2008, she was appointed Dean, School of Environment, Design and Technology, (SEDT).
Eme -Anele was later made TETFUND Desk Officer by Sir Onukaogu, a position which she made her to sign any amount of her choice without questioning from the Rector, under the guise of handling TETFUND issues.

In 2011, Eme-Anele applied for scholarship for her doctorate and was granted. She was paid N1.5 million, but didn’t go for the programme neither did she return the money to the Polytechnic.

An internal memo sighted by newsmirrorng.com dated November 28th, 2014, signed by the Internal Auditor of the Polytechnic, Ijeoma Okoro, which raised a query for the information of the then Acting Rector, Prof. Uche Ikonne, over an alleged payment voucher in which Sir Onukaogu, instructing the former Bursar to pay certain contract sums without due process was carried out, despite the Auditor’s objections.

Sir Onukaogu also awarded contracts which values exceeded his approval limit of N500, 000 million and reduced the three years which a staff may be qualified for promotion to two and half years.

The most bizarre case of financial recklessness according to the visitation panel report, was the N12 million the Polytechnic spent at a one day Ebola campaign after the World Health Organization, (WHO) had declared Nigeria free from Ebola.

The Ogbonnaya panel ordered two companies, Kel Client Multi Coy, paid N2 million and N.N Printing Nig. Ltd, paid N10 million, to refund the monies. Till the time of filling this report, the money is yet to be refunded into the coffers of an institution that is clearly in a financial oxygen chamber.

Sir Onukaogu and the former Bursar of the Polytechnic, Mr. Onuma E. Onuma, failed to remit taxes to the Federal Inland Revenue Service (FIRS) and Board of Internal Revenue (BIR), as well as staff union check off dues and cooperative contributions to the workers’ union.

This brought the Polytechnic in conflict with the federal and state tax authorities as well as the staff union.

While lamenting the problems facing the Polytechnic during his short – lived tenure as Chairman of the Council of the Polytechnic, Dr. Chuku Wachuku, stated that a N2 billion loan taken by the previous governing council to offset arrears of salaries owed workers was totally mismanaged, leaving the institution in huge debts.

He, however, commended the visitor to the Polytechnic, Gov. Okezie Ikpeazu, for paying off the loan to enable the new council operate on a clean slate, but regretted that the institution has further been exposed to another debt amounting to over N2 billion with a bloated staff strength – a case of one step forward but two steps backwards.

According to Wachuku who was then flanked by members of the council;

” _The N2 billion loan was to offset 8 to 10 months’ salary arrears. It was totally mismanaged through fictitious contracts; they were unable to offset the salary arrears owed workers”, he said_

He blamed the workers union for keeping silent while past administrations looted the institution.

” _They have suddenly woken up to embark on strike. Anybody found to have taken money belonging to the Polytechnic must pay, no matter his status. We will step on toes to re-build Abia Poly and transform it into a first class institution.”_

But did they or have they paid, despite their indictment by the visitation panel?

Documents of brazen looting available to newsmirrorng.com, which will be made public in our next publication and what eventually transpired when the Board and school management were invited by the Economic and Financial Crimes Commission (EFCC), Abuja and how they were able to have a temporary relieve heralding the Ibrahim Magu days will leave you in shock about the fight for corruption in Nigeria.