A Governorship hopeful under the People’s Democratic Party PDP in Abia State, Chief Ncheta Elvis Omerekpe, has called on party delegates from Isiala Ngwa South to vote their conscience at the forthcoming primaries. 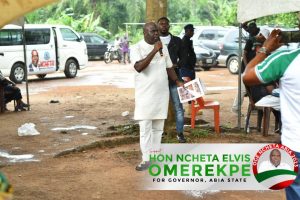 He said this call has become imperative as the primary election approaches, adding that their has been alleged plans to bribe delegates with N2m to vote for an anointed candidate in the primaries, reminding the stakeholders and delegates that they cannot afford to vote against their conscience. 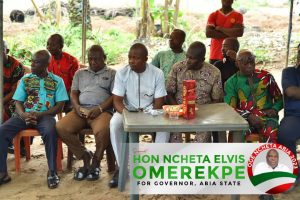 He told the delegates not to be perturbed amid threats of dealing with them if they fail to vote, saying it is not true that anyone will discover who they voted for on the day of primaries. 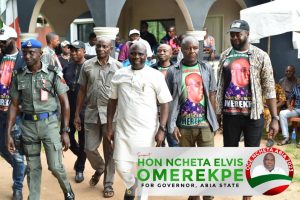 Omerekpe enjoined them to accept money offered them and cover it with the blood of Jesus but still go ahead to vote him, assuring that he will not disappoint them and Abians in General if entrusted with their mandate. 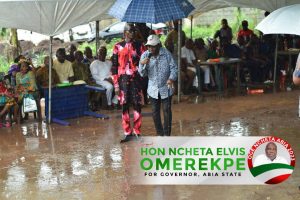 The “Ofor Ndi Igbo” who spoke on Friday in Umuvo, Ama Ise Ahaba, Isiala Ngwa South LGA of Abia during is consultation visit with PDP party stakeholders, delegates, party faithful, said the quest to get a credible candidate to sell the party, rests with them, urging them to see it as a clarion call to do the right thing for the benefit of the Party and indeed Ndi Abia.

He said looking at his antecedents and what he has achieved over the last 15 – 17 years in the area of human and capacity building, he is eminently qualified to lead the party to victory in 2023.

Chief Omerekpe said, he had in the past, shared 400 motorcycles to youths without knowing any of them.

Adding that, through his various medical outreaches, he has treated over 50 thousands Abians across all LGAs in the State, done about 32 kilometer roads with drainages, built skills acquisition centres, erected mighty edifices as town halls and school buildings, distributed medical consumables across various health centres in Abia state, single handedly and without being in Government,

He pledged to be the first Governor that will use Julius Berger to fix roads in the State if elected, adding that he will use the resources in Aba judiciously and develop Aba and various parts of the state yearning for development.

On his part, the PDP Chairman, Isiala Ngwa South, Hon Edwin Ihejirika, said the people of Isiala Ngwa South are aware of his philanthropic gestures, praying God to perfect his ambitions and aspirations to be the flag bearer of the party and finally the next Governor of the State.