Following recent and extant political happenings in our dear state of Abia,we political stakeholders of Peoples Democratic Party in Ukwa East/Ukwa West Federal Constituency,met today, Sunday 13th September,2020 and after a critical holistic survey and dispassionate analysis of the happenings, resolved and issued the following communique;

2.That as a distinct Political Bloc,we are not,in anyway, unconscious or unmindful of our enormous contributions to the economic well-being of our state,

3.That as a distinct political bloc,we,the people of Ndoki and Asa, strongly believe that Governorship should be retained in old Aba Division that is Ukwa La Ngwa in 2023,

4.That as a distinct political bloc,we firmly and irrevocably advocate that,like what happened in Old Bende where governorship was held for sixteen consecutive years by core Bende and Umuahia group,it is the turn of Ukwa people to mount the governorship of the state come 2023,

5.That as a people of distinct political bloc,we still have confidence in the Governor of Abia State,Dr Okezie Victor Ikpeazu and do certainly hope,he will impact positively on the welfare of our people, especially,in the areas of road infrastructure and employment,before the end of his tenure in May 2023,

6.That as a distinct political bloc that has been contributing more than any other political bloc in Abia State,in terms of economic buoyancy, equity and peaceful co-existence,we vehemently believe that,at the appropriate time when equity, fairness and good conscience would naturally demand we make our interest in 2023 known to other political blocs in the state,the blocs would have every cause to justify our governorship aspiration and

7.That we, hereby, resolve that this meeting attended by major Political Stakeholders, Local Government Area Chairmen of P.D.P, their Executive Members,Ward Chairmen, Critical Arms of P.D.P Ward Executive Committees and other statutory delegates,will continuously hold as to constantly review both political and economic developments in Abia State and that, henceforth,the collective interest of Ukwa people as a distinct political bloc,shall be uppermost in every consideration of us in Abia State. 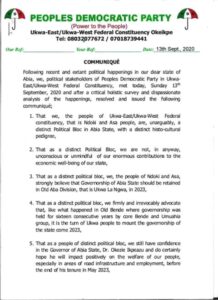 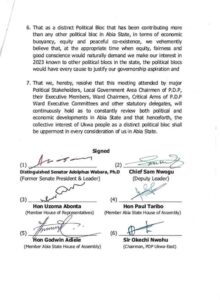 SENATOR SMART ADEYEMI MUST APOLOGIZE TO ALL ABIANS. – Sen T. A. Orji explodes