The minister of Science and Technology and Innovation, Dr. Ogbonnaya Onu, may be President Muhammadu Buhari’s favourite candidate to carry the flag of the ruling All Progressives Congress (APC), in the 2023 presidential election. 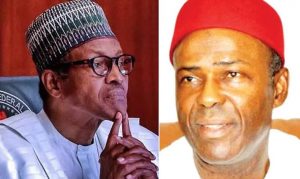 Although there were speculations yesterday that the screening of the party’s presidential aspirants earlier scheduled for May 23 may have been postponed to accommodate former President Goodluck Jonathan who is suspected to have submitted his nomination form through the backdoor, insiders suggested a completely different track in confidential discussions. 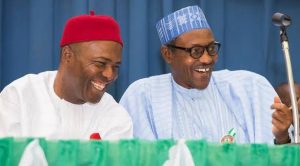 “The press may have got the whole speculation about Jonathan wrong,” one of the sources with deep connections to the party and the Presidency said. “The real dark horse, the man to watch, is Ogbonnaya Onu.”

The source continued: “It’s because the scales are tipping in Onu’s favour that President Buhari has delayed the signing of the amendment to the Electoral Act, that may have permitted political appointees to be voting delegates at the primaries.”

In Nigeria, state governors fund the parties and wield significant control over delegates at election time. Keeping political appointees out of the equation increases governors’ control. At the same time, however, it makes is easier for the President, who still exercises considerable power of patronage, to whip them in line.

Onu is not the only candidate that could potentially benefit from the exclusion of political appointees in a field that boasts over 25 APC aspirants who have submitted nomination forms, but who mostly have weak party structures. The source said, however, that “Onu carries additional appeal and advantage.”

At 70, age is not one of those advantages in country where there appears to be an increasing demand for youth and energy.

“That is true”, another well-connected source said last night. “But Buhari is looking for something more than age. He is desperate to redeem his legacy, especially in the wake of the raft of crises facing the country. You know the role of Buhari, his sacrifice and that of the Nigerian Army during the civil war.

“Rooting for Onu would be a masterstroke for the country’s unity at this time. It would repair Buhari’s damaged legacy, especially the accusations of nepotism against him. And increasingly, the thinking inside the Villa is that it is both fair and right to look to the South East.”

The source added that Onu, an engineer with a PhD in Chemical Engineering, has enjoyed a long-standing relationship with Buhari dating to their days, first in the All Nigerian Progressives Party (ANPP), under whose flag Buhari contested the 2003 election.

Although he is only one of the six South East candidates in the race – the others are Governor Dave Umahi of Ebonyi State; former Imo State Governor Rochas Okorocha; former minister of state for Education, Emeka Nwajiuba; former Senate President Ken Nnamani; and Mrs. Uju Ohanenye – he has served in Buhari’s government as minister since 2015, making him the longest-serving South East minister left in the race.

He is also believed to share similar values of ascetism with the president, his only major run-in with controversy being his promise in 2018 to create 400,000 jobs by producing pencils locally, a promise kept in the breach.

“I can tell you,” the source said, “that increasing, those with big money are less favoured.”

There were indications yesterday that Buhari could convene a meeting of the aspirants on Wednesday to hint at his preferred candidate, a move that could whittle down the crowd of aspirants significantly ahead of the Sunday primaries.

It would be recalled that this was the strategy used to choose the new APC national chairman, Abdullahi Adamu, in March.

In recent times a number of groups, including the Southern and Middle-belt Forum, led by elder statesman, Edwin Clark, have called for the ruling party to yield the presidential ticket to the South East.

The leader of the Yoruba Cultural Group, Afenifere, Chief Ayo Adebanjo, was the first leading South west leader to make the call on grounds of “equity and fairness.”

During an interview with Channels TV in January, Buhari had said even though he had a preferred candidate, he would keep the candidate close to his chest for the candidate’s sake.

That statement has been interpreted variously, especially by dark horses, but so far, none so probable as Onu.

Buhari and Onu share a long political history. They were both in the defunct All Nigeria Peoples Party (ANPP). While Buhari, in 2010, left to form defunct, Congress for Progressive Change (CPC), Onu emerge national chairman of ANPP.

Their paths crossed politically again, when Onu as chairman of ANPP spearheaded the merger of legacy parties, namely CPC, Action Congress of Nigeria (ACN) and a faction of All Peoples Grand Alliance (APGA) that formed the APC.

Until the APC merger, Onu had remained a loyal ANPP (formerly APP) member since 1998 when he emerged the party’s presidential candidate.